Emulsions result when two or more immiscible liquids are agitated together. Think of oil and water, which combine only when the mixture is vigorously shaken. Normally, such emulsions are unstable and the two liquids separate into two distinct layers when left undisturbed.  To enable stable dispersion, stabilizers or emulsifying agents are added. Dishwashing liquid, for example, is a commonly-used emulsifying agent in our daily lives.

Dr. Ma’s work will examine whether the shape of stabilizer particles can increase the stability of the emulsions. He hypothesizes that compared to spherical particles, rod-shaped particles will permit a greater number of particle-to-particle contacts, forming stronger protective layers around liquid droplets and thus preventing the droplets from merging together. In particular, Dr. Ma and his team are interested in exploring the use of carbon nanotubes (CNTs), which have a rod-like shape and a high aspect ratio (ratio of length to diameter). CNTs have been well researched and documented in the scientific literature. They can also be chemically modified to “program” their behavior at the interface, according to Dr. Ma.

The research will take place in several interdependent phases, with the first centering on model development. Dr. Ma will collaborate with a French research team led by Prof. Francisco Chinesta (EADS chair professor at Ecole Centrale de Nantes) in developing a model that aptly correlates the microstructure with the flow behavior of CNTs at a liquid-liquid or air-liquid interface. Meanwhile, Dr. Ma and his graduate students (Sahil Vora,Yang Guo, and Huseini Patanwala) will carry out experimental studies to reveal how the two liquids actually respond to the introduction of the CNTs. They will also explore how CNTs at the interface form orderly structures, or alter their structural alignment, when compressed. Throughout the project, the researchers will carefully examine their samples using state-of-the-art experimental techniques to characterize and understand the behavior of the liquids and the CNT stabilizers under different conditions. 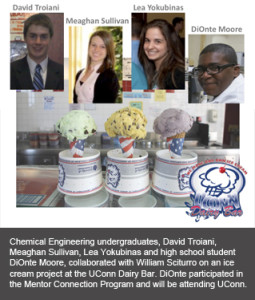 of the research will offer a general and yet relatively simple method for improving the stability of emulsions, and for prolonging the shelf life of widely used pharmaceutical, agricultural, and other chemical products. The findings may also revolutionize the use of nanoparticles for immobilizing oil that is trapped tightly within rock formations. Dr. Ma notes that in the long-term, the research may offer important clues for the development of metamaterials that can be used in cloaking devices and in light-based circuits that may outperform electron-based computers in terms of speed, power consumption and cost. 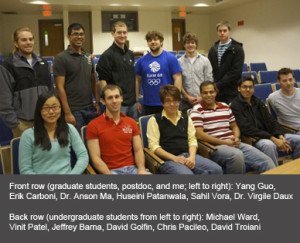 Dr. Ma intends to integrate undergraduate and graduate students, middle and high school teachers, and visiting high school students, at all levels of the project. He also intends to use this project as an educational platform for outreach to high school students in underserved communities.  In particular, he envisions a series of hands-on demonstrations, including the use of culinary foams and emulsions (e.g., cappuccino foam, ice cream mix) as food-based themes that illustrate basic scientific concepts while conveying the fun of engineering.

In 2012, the Dr. Ma and his team hosted 10 undergraduates, one high school student, and one high school teacher, who worked on various projects ranging from the rheology of nanotube-stabilized emulsions to the science of ice cream making (in collaboration with the UConn Dairy Bar). A Mentor Connection participant, DiOnte Moore, who participated in the ice cream project, recently decided to attend UConn.

Dr. Ma, who earned his Ph.D. from the University of Cambridge in the UK, joined UConn in August 2011 following a two-year appointment as the J. Evans Attwell-Welch Postdoctoral Fellow at Rice University. He has a dual appointment in the Polymer Program at the Institute of Materials Science (IMS). He recently received the Distinguished Young Rheologist Award from TA Instruments, along with an NSF Early Concept Grant for Exploration Research (EAGER) award, which focuses on investigating the use of nanoparticles in the delivery of cancer drugs.