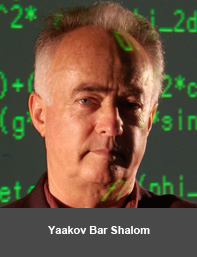 Dr. Yaakov Bar-Shalom, a University of Connecticut Board of Trustees Distinguished Professor of Electrical & Computer Engineering and the Marianne E. Klewin Endowed Professor in Engineering, was awarded the 2012 Connecticut Medal of Technology for his groundbreaking contributions to the advancement of radar and sonar technology.  Dr. Bar-Shalom’s work has served to strengthen the nation’s defenses and air transportation systems.

He received the award during the annual meeting of the Connecticut Academy of Science and Engineering (CASE) on May 31. It is the state’s highest honor for technological achievement in fields crucial to Connecticut’s economic competitiveness.  Read the press release here.

Throughout his 36 years with UConn, and earlier in his career, Dr. Bar-Shalom has made seminal contributions covering virtually all aspects of target tracking, detection, estimation and data fusion, and many aspects of random systems theory and its applications. He directs the Estimation & Signal Processing Laboratory at UConn, which develops advanced computing algorithms for information processing in the areas of defense against ballistic missiles, tracking the motion of stealthy targets (from underwater to space), civilian and military air traffic, tracking a large number of moving surface targets, and biomedical applications such as tracking the motion of fibroblast cells. His algorithmic tools and tracking paradigms are used worldwide for target detection and tracking by military and national defense organizations.

Dr. Bar-Shalom’s awards include the 2008 IEEE Dennis J. Picard Medal for Radar Technologies and Applications; the 2002 J. Mignona Data Fusion Award presented by the Department of Defense Joint Directors of Laboratories Data Fusion Group; two M. Barry Carlton Awards for Best Paper in the IEEE Transactions on AES (1996, 2000); IEEE Control Systems Society Distinguished Member Award (1987); and the International Society of Information Fusion (ISIF) Distinguished Leadership and Dedicated Service Award (2003). He was elected a Fellow of IEEE for contributions to the theory of stochastic systems and of multitarget tracking, and Dr. Bar-Shalom served as President of ISIF in 2000 and 2002.