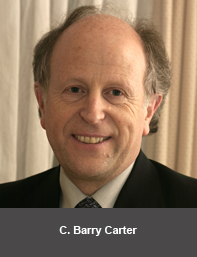 Dr. C. Barry Carter, professor of Materials Science & Engineering, will receive the Microscopy Society of America’s (MSA) 2013 Distinguished Scientist Award for the Physical Sciences in recognition of his internationally acclaimed research and distinguished contributions in the field of microscopy.

He will be presented the award in August during the society’s Microscopy & Microanalysis 2013 meeting in Indianapolis.  Given annually since 1975, this Award is the highest honor bestowed by the Society.

Dr. Carter’s current research work focuses on explorations of the role of defects, particularly dislocations and interfaces, and defect chemistry on properties of materials.  An internationally recognized leader in the characterization and imaging of materials, Dr. Carter has co-written the textbooks Ceramic Materials: Science & Engineering (with M.G. Norton; 2nd ed., 2013) and Transmission Electron Microscopy: A Textbook for Materials Science (with D.B. Williams; 2nd ed., 2009).  He has published more than 700 articles on a wide range of crystal defects, with 300 in archival journals. In addition, he is Editor-in-Chief of the Journal of Materials Science and the Chair of the Awards Committee of the Materials Research Society. He is also a CINT Distinguished Affiliate Scientist at Sandia National Laboratory.

Dr. Carter is a Fellow of MSA, the Materials Research Society (MRS), the American Ceramic Society (ACerS), the Royal Microscopical Society (RMS), and the American Association for the Advancement of Science (AAAS). He is also an elected member of the Connecticut Academy of Science and Engineering (CASE).

His awards include the Berndt Matthias Scholar Award (Los Alamos National Laboratory), the 2004 Jubilee Professorship (Chalmers University), the Alexander von Humboldt Senior Award, and a John Simon Guggenheim Fellowship. In addition, he serves as the 2011-2014 President of IFSM, the International Federation of Societies for Microscopy, and is a past president of MSA.

Dr. Carter earned his D. Phil. in Metallurgy & Science of Materials at Oxford University in 1975, his M.Sc from Imperial College London and in 2005 he received the Sc.D. degree in Natural Sciences from Cambridge University.

This is the first time that the MSA Distinguished Scientist Award will be presented to a member of the UConn faculty. Modern transmission electron microscopes can now almost routinely image materials with atomic resolution and picometer precision. As Dr. Carter often says: TEM is the essential tool for nanotechnology and for understanding all materials at the atomic level. He previously served as Head of the Department of Chemical, Materials & Biomolecular Engineering.