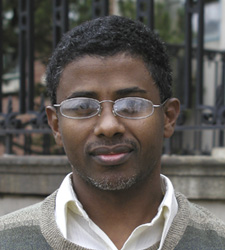 Dr. Gebremichael will receive $357,156 over the three-year life of his NIP award, which involves research aimed at determining how well NASA’s current global hydrologic models predict actual processes taking place over portions of the North American and African continents.

NASA’s role in improving weather observation and prediction has been enormous. Weather satellites have the significant advantage of vantage point: they can observe large expanses of the Earth and track weather almost continuously, including activity taking place over the oceans. Weather satellites are usually equipped with two types of radiometers: infrared, which collect data about the top layer of clouds, and microwave, which can detect cloud structure and rain data. NASA combines these data to produce hourly rainfall rates across the globe.

However, NASA’s models are imperfect in their portrayal of actual, observed rainfall activity. The satellite-based microwave sensors image only twice daily, while the infrared sensors image every 30 minutes. The microwave sensors are more accurate than the infrared sensors since they respond primarily to raindrops within clouds rather than merely cloud-top temperatures as infrared data do. On the other hand, infrared data have the advantage of more frequent observations than microwave data, which is critical since rainfall has tremendous temporal variability. NASA uses empirical algorithms to combine the poor-quality-yet-frequent infrared data with the high-quality-yet-infrequent microwave data to produce rainfall rates. These algorithms, like any other empirical algorithms, are subject to errors. International Precipitation Working groups agree that extensive validation analysis is needed to quantify the errors associated with these rainfall products and to improve the empirical algorithms.

Further, NASA uses its satellite observations of rainfall in global land surface models to predict hydrologic conditions. However, NASA’s models are still imperfect in their portrayal of actual, observed hydrologic conditions. Developing reliable global land surface models is among the grand challenges of 21st century hydrologic science because of the complex interactions between land surfaces – such as soils, vegetation and topography – and weather and climate, which produce strong hydrologic variability (river flow, soil moisture, water storage and evapotranspiration).

Dr. Gebremichael will initially focus on how well NASA predicts hydrologic variability for three locales characterized by differing climates and watershed characteristics: South Africa, Oklahoma and Connecticut. All three are equipped with ample ground-based sensing and collection equipment to detect rainfall, soil moisture, river flow and other characteristics. After having determined the difference between NASA’s predicted hydrologic variability and actual, observed hydrologic variability, Dr. Gebremichael will seek next to identify the source of the discrepancy. For example, what is the contribution of the error in satellite rainfall inputs? What is the contribution of the global land surface model structure and parameterization? How do these errors behave in different climates and basin properties? How can we minimize the errors?

Dr. Gebremichael points out that such study is critical to addressing the security of water resources (floods, droughts, water scarcity, water usage, water quality, water-ecosystem interactions, water-climate interactions etc.). Recent news headlines – such as the Myanmar death toll resulting from a typhoon, and the fact that one-fourth of the world’s populations reside in water-scarce regions – underscore the importance of these issues. In the longer term, Dr. Gebremichael’s work will lay a foundation for understanding how global hydrology is changing, the chief causes of climate change, and how the Earth’s hydrological systems respond to natural and human-induced changes.

The NIP research builds upon Dr. Gebremichael’s ongoing NSF-sponsored work aimed at developing reliable methods of monitoring water resources in the Nile River basin within Ethiopia over time, using ground-based sensing methods, satellite data and physically-based hydrological and meteorological models. During summer 2008, Dr. Gebremichael and students Nathaniel Bergan (who will begin graduate studies at Columbia University in September), senior CEE student Terrence McAuliffe, and CEE doctoral students Menberu Bitew and Feyera Hirpa, will spend two months in Ethiopia establishing an experimental watershed to study hydrological processes in a tropical regime, collecting short-term intensive hydrological data, and planning the locations of a series of small dams along Nile tributaries that will trap sediment typically transported all the way to Egypt, where it now flows into and is gradually filling Lake Nasser. For additional details of Dr. Gebremichael’s research, please visit his research group web page at http://www.engr.uconn.edu/grg/.