Dr. Gokirmak’s work is aimed squarely at making electronic devices – such as computers, cell phones, digital cameras and USB drives – more economical and better performing in terms of computational speed, energy use and storage capacity. In the last decade, consumer electronics have exploded in popularity across the globe, driving the need to advance technologies that improve device performance, functionality and energy usage. 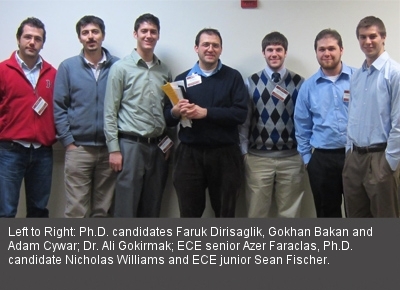 Electronic devices rely on a number of memory technologies. Computer hard drives, used as the main data storage, are relatively slow.  The information in the hard drive is transferred to the dynamic random-access memory, or DRAM, when the computer is turned on. DRAM keeps information readily accessible to the CPU in a personal computer and stores it temporarily to enable high speed-data processing; however, DRAM consumes some power to store data and once the power is shut off, the stored information is lost. In contrast, non-volatile memories such as flash memory – commonly found in USB drives, cell phones, tablets and solid-state hard drives – retains the information even when the power supply is turned off.  The storage density of flash memory is similar to DRAM; however, the access times of flash memory is much slower.

“Computations are increasingly requiring larger and higher-speed RAM, while memory scaling is becoming more difficult due to decreasing reliability in charge storage and sensing, and increased power consumption. Non-volatile memories retain their information without power, hence significantly reducing power consumption by eliminating the need for refresh and by allowing instant shutdown/reboot. In recent decades, a strong industrial effort has been put into non-volatile memory technologies, and in recent years phase change memory (PCM) has been getting particular attention.  PCM is the most mature of the nanometer scale non-volatile memory candidates that can deliver the speed and storage capacity of DRAM which can enable low-power high-performance computation.” notes Dr. Gokirmak.

To replicate the common binary data storage format, in PCMs,  an electric current is passed through a phase-change material (most often an alloy containing germanium, antimony and tellurium) to produce two states: crystalline and orderly with low electrical resistance, and the disordered amorphous state characterized as having high electrical resistance. While many applications require just two states for memory storage, PCM is capable of being manipulated to achieve multi-level storage that may allow for more dense data storage with less energy usage.

Dr. Gokirmak’s CAREER research will focus on the integration of PCM with silicon electronics and the fundamental scientific challenges regarding electrical, thermal and thermoelectric processes that take place in a nanometer scale geometry. This research effort will integrate fabrication and electrical measurements with computational studies, in collaboration with the IBM Watson Research Center.  The research partners at IBM will play a vital role in discussions related to current state of the art in the industry and direction of the fundamental scientific studies needed for PCM to become a mainstream memory technology. The devices will be fabricated by UConn students at the IBM Watson Research Center, while experiments and computational studies will be carried out at UConn.

Dr. Gokirmak and Dr. Helena Silva co-direct the Nanoelectronics Laboratory at UConn in Electrical & Computer Engineering.  Drs. Gokirmak and Silva previously received a $512,000 grant from the U.S. Department of Energy in support of research on current-induced crystallization of silicon and thermoelectric transport in silicon nanostructures (read the story here: https://news.engr.uconn.edu/nanoelectronics-team-awarded-grant.php). The Nanoelectronics Laboratory has received approximately $1.7M in federal research grants since 2007.