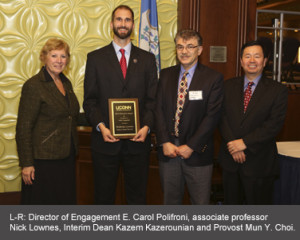 Dr. Nicholas Lownes was selected to receive one of just nine awards presented in conjunction with the 2013 Provost’s Awards for Excellence in Public Engagement.  Dr. Lownes is the F.L. Castleman Associate Professor in Engineering Innovation in the Civil & Environmental Engineering Department and serves as Director of the Center for Transportation and Livable Systems.

He was presented the Early Faculty award in recognition of his leadership in nurturing a multi-disciplinary collaboration between UConn and the State of Connecticut’s transit and planning officials that will improve federally-mandated data collection and reporting while ensuring greater transit equity across widely varying socioeconomic and racially-diverse communities in Connecticut.

The team was honored for its leadership in applying innovative strategies for improving the well-being of citizens and communities across the state.  “The idea behind the t-HUB arose several years ago, during meetings with transit officials who expressed concerns about their ability to meet federal reporting requirements tied to transit funds,” explains Dr. Lownes. Essentially, entities receiving Federal Transit Administration (FTA) funds must collect demographic data about the citizens served by public transit systems, specifically buses and trains, in their locales; establish system-wide service standards and policies; evaluate service and fare changes and customer satisfaction; monitor transit service and develop evaluation plans – all while complying with Title VI of the landmark 1964 Civil Rights Act. Title VI prohibits discrimination on the basis of race, color, and national origin in programs and activities receiving federal financial assistance. 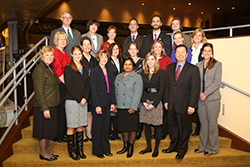 Dr. Lownes notes that although Connecticut is a geographically small state, it comprises 14 regional/metropolitan planning organizations and more than 15 transit operators receiving federal funds – all of which must comply with the reporting rules. The socioeconomic character and racial makeup of the state’s many communities also vary wildly, and many communities lack the staffing and other resources necessary to meet the service and reporting requirements, which also include a “safe harbor” provisions requiring that printed materials such as transit schedules and complaint procedures appear in any language within a community where 1,000 residents or 5% of the population speak that language.  Connecticut has more than 25 safe harbor language groups, according to Dr. Lownes.

To address these challenges, Dr. Lownes and his colleagues assembled members from across multiple stakeholder communities to identify their needs and align transportation research efforts accordingly. The group then began to develop a prototype web application to simplify and standardize both the data management and analytical processes.  The team also staged a series of workshops aimed at engaging representatives from the operator community, regional planning organizations, transit districts, FTA, the Connecticut Department of Transportation (CT DOT) and the t-HUB team.  Fifty-six individuals from 27 different organizations participated in the workshop series.  What emerged from the workshop series was a comprehensive transit strategy document for Connecticut.

These efforts have resulted in new partnerships and applications of t-HUB and its analytical tools, including a new collaboration to expand t-HUB’s applications to regional planning organizations.  Currently, the t-HUB team is targeting its efforts on helping CT DOT to develop a service equity plan. The team is also working toward a “longitudinal employer household dynamics” application, which affords transit providers insight into where people live versus where they work. Dr. Lownes and his colleagues are interested in understanding how well Connecticut’s various transit sectors are meeting the transportation needs of low income residents who may otherwise expend a large share of their income on automobiles to ensure access to jobs, groceries and other life necessities. “Many lower income residents don’t work 8 a.m. to 5 p.m. jobs, but the transit service typically revolves around those commuter hours. We hope to identify any gaps between current transit service and the needs of residents so that Connecticut service providers can resolve these conflicts,” he says.