Dr. Pu-Xian Gao, associate professor in the Department of Materials Science & Engineering and the Institute of Materials Science, has been awarded an Alexander von Humboldt Research Fellowship.  He received the fellowship in recognition of his research in nanomaterials science and engineering, which mainly focuses on bridging nanomaterials science and engineering with practical applications in energy and environmental catalysis, sensors and related electronics, fire security and energy sources, and bioenvironment-nanomaterials interfaces. 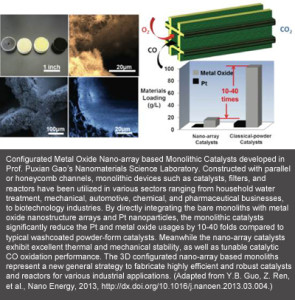 Dr. Gao will carry out his fellowship at the Friedrich-Schiller-University of Jena and the Technical University of Ilmenau in Germany beginning this fall and continue through the summer 2014.  He plans to work with his hosts on the development of three-dimensional (3D) nano-photovoltaics and nano-magnetoelectronics, and to study the manipulation of photons and electrons, and their interactions and couplings by virtue of 3D nanostructure assembly and high energy ion implantation.

Every year, the Alexander von Humboldt Foundation enables more than 2,000 researchers from all over the world to conduct cutting-edge research in Germany. The Foundation maintains a network of more than 26,000 Humboldtians from all disciplines in over 130 countries worldwide, including 49 Nobel Laureates.