Dr. Radenka Maric of CBE and MSE, and Dr. Mark Aindow of MSE have key roles in two projects that have received a total of $6.7 million from Advanced Research Projects Agency-Energy (ARPA-E) and are designed to reduce the overall operating costs of solid oxide fuel cells (SOFCs). 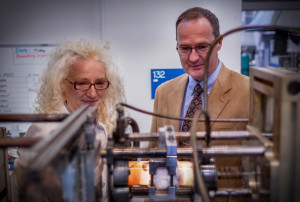 The ARPA-E grants are extremely competitive with only 13 new awards being made by the agency in this cycle, corresponding to less than 5 percent of the full proposals submitted. As such, it is particularly noteworthy that two of these awards involve UConn researchers. ARPA-E is an organization that advances high-potential, high-impact energy technologies that are too early for private-sector investments by funding researchers who develop new ways to generate, store, and use energy.

Working with UTRC, Dr. Maric will develop an intermediate-temperature SOFC for residential applications that will combine a building’s heating and power systems into one unit. The aim of the three-year project is to develop a fuel cell that works at a lower cost with less degradation. With FCE, Drs. Maric and Aindow will develop an intermediate-temperature fuel cell that directly converts methane to methanol and other liquid fuels.  Advanced metal catalysts will be optimized to improve the yield and selectivity of the methane-to-methanol reaction. Both projects make use of a reactive spray deposition technique (RSDT) developed by Dr. Maric to lower manufacturing costs.

One of the UConn researchers’ tasks is to develop an electrochemical cell capable of producing liquid fuel such as methanol directly from the methane containing feedstock, and to be able to do it at a temperature of about 500 degrees Celsius. What is commonly used now are high-SOFCs operating in the range between 800 and 1,000 degrees Celsius. Lowering the temperature lessens the level of degradation. Because lower temperatures allow for the use of cheaper materials than the ceramics currently used, that lowers the costs of operation.

SOFCs have been used for decades, but they are still very expensive and there is still significant degradation.

“It’s still an energy-intensive process,” Maric said.  “So in order for fuel cells to penetrate the market, they have to be cost-effective.” Targets for cost-efficiency have been increasingly ambitious. Maric said the target for low-temperature fuel cells is now at $30 per kilowatt hour.

“You have to hit these costs targets to be able to reach the mass market,” she said. “The more we have these materials and processes that can lower the costs, the closer we are to getting them to market.”

By the end of the three-year period, they expect to have a short stack of five to 10 cells that will go from the phases of concept to prototype to demonstration. Maric and Aindow are confident that they’ll complete all three phases successfully.

“This is technology driven,” Aindow said. “It’s not like some of the blue skies research that we do – ‘Well, it sounds like a good idea, let’s try it out.’ It really has to have some sound feasibility behind it.”