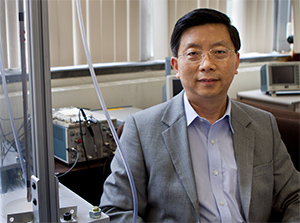 Pratt & Whitney Endowed Chair Professor in Mechanical Engineering Dr. Robert X. Gao has been selected to receive the IEEE Instrumentation and Measurement Society (I&M) 2013 Technical Award, one of just four awards presented yearly by the society.  The society is dedicated to the advancement of measurement science by developing methods and electrical/electronic instruments to measure, monitor and/or record physical phenomena.

Dr. Gao was selected “For significantly advancing the state-of-the-art in electrical capacitance tomography instrument design.” Upon news of the honor, he said, “I am honored and at the same time, humbled by this award, which recognizes not only of my own work, but also that of my former and present students whose diligence and dedication helped turn ideas into reality.  To them, especially to Dr. Zhaoyan Fan who has been instrumental in this research, I dedicate this award.”

Dr. Reza Zoughi, the Schlumberger Endowed Professor of Electrical and Computer Engineering at Missouri University of Science and Technology (S&T) and President of the I&M Society, has known Dr. Gao for many years, initially through their collaborations as the Editor-in-Chief (Dr. Zoughi) and an Associate Editor  (Dr. Gao) on the society’s Transactions on Instrumentation and Measurement.

“Our society has the greatest bandwidth of all societies, since I&M covers the spectrum of all technologies for which measurements and instrumentation are factors.”

“One of the things that stands out about Robert is that he is a mechanical rather than electrical engineer, yet he has a strong presence in our society. He is a Fellow of both the ASME and IEEE, which distinguishes him as a researcher of enormous scientific breadth, quality and impact,” says Dr. Zoughi. “The I&M Technical Award honors individuals or groups who have demonstrated ‘outstanding contribution or leadership in advancing instrumentation design or measurement technique,’ but in Robert’s case, it is ‘outstanding contribution and leadership.’ Robert has shown enormous leadership and contributed significantly to the advancement of measurement science and instrumentation. He embodies the essence of quality that I discuss in my President’s message.”

He will officially receive the award during the society’s International Instrumentation and Measurement Technology Conference (I2MTC) 2014 meeting in May. The selection criteria for the nominee are based on substantive documentation and tangible evidence of achievement submitted by the nominators. The award entails a certificate and $2,000 honorarium, in addition to travel expenses to attend the award ceremony.