Associate professor Yong Wang (Chemical Engineering), along with doctoral student Mark Battig and Dr. Boonchoy Soontornworajit, has made innovative and invaluable improvements to the drug-loaded implantable hydrogels used for drug delivery. This innovation will allow medical professionals to both treat complex disease and facilitate the healing process in stages. 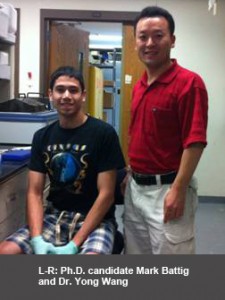 Previously, implants could be externally triggered to release medication to diseased tissue at a given time, but such implants could deliver only a single drug.  With the advances of the team, implants can now deliver multiple drugs, in sequential order, at specified intervals.

To create such gels, Dr. Wang and his research team added DNA aptamers to the existing gels. To release the drug, the gel is injected with a short DNA strand that binds to the protein-binding site of the aptamer, triggering it to release the protein. The gel releases a given drug determined by the DNA sequence injected.

This research was described in a paper entitled “Programmable Release of Multiple Protein Drugs from Aptamer-Functionalized Hydrogels via Nucleic Acid Hybridization,” which was published in the Journal of the American Chemical Society, among the most prestigious journals in the fields of chemistry and chemical engineering. The research was later highlighted in the prestigious magazine, Chemical & Engineering News, and publications of the Royal Society of Chemistry.