Vincent Palumbo, a Ph.D. candidate in materials science and engineering at the University of Connecticut, has a special bond with the School of Engineering that first took root during his high school years.

In an effort to introduce younger students to engineering fundamentals and career paths, the School of Engineering operates an annual summer program for outstanding high school students interested in the field.  As a junior at Daniel Hand High School, Palumbo was nominated by one of his teachers to attend the week-long residential program 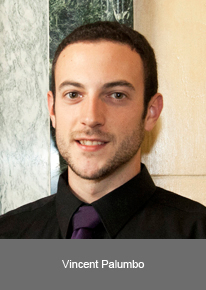 at the Storrs campus, and the experience sparked his affinity for engineering and UConn.  “It really exposed me to devoted faculty and students, excited me about engineering, and set me on a path toward a career in engineering,” he said.

Palumbo, who previously received his B.S. and M.S. degrees in materials science and engineering at UConn, plans to use his education to teach at the college level and hopes to “someday relay the wonders and power of engineering to future students.”

Shifting from the interdisciplinary work of his M.S. degree, which focused on the interactions between nano-scale forces and structures with living cells, Palumbo’s current thesis research is on studying the combined blast and fire resistance for construction steel used in various infrastructures, including buildings, bridges, tunnels, and other structures.  The work directly relates to the collapse of the World Trade Center towers in 2001. “The collapse was found to be a result of prolonged exposure to high temperatures after the blasts, degrading the structural properties of the steel in the buildings,” he said.

Since the attack, new materials and designs are being developed in an effort to reduce such damage in the future. Palumbo’s research specifically focuses on how the microstructure of construction steel, especially the type of steel used in the new World Trade Center building, is affected by exposure to shock waves and subsequent high temperatures.

Originally from Madison, CT, Palumbo attributes his engineering success to his high school chemistry teacher, who had influenced him toward the field at an early age. “She was the one who recommended that I look into UConn’s Explore Engineering (E2) program, and that’s really what set things in motion,” he said.  As one who benefitted from exposure to engineering at a relatively young age, Palumbo appreciates the value of outreach and is now a regular volunteer for the E2 program.

As for his continued affiliation with UConn, Palumbo attributes it, yet again, to his academic mentor. “My advisor, Dr. Bryan Huey, played a big role in my staying here,” he said. “[Dr. Huey] advised me through my independent study as an undergraduate as well as for my M.S., and he recommended that I pursue a Ph.D. with UConn as well.”

Palumbo is a recipient of the Koerner Family Fellowship for his Ph.D. research, in addition to being awarded the GAANN fellowship for his master’s work in biology. He was the 2010-2011 president of the UConn student chapter of the Materials Research Society (MRS) and is the president of Alpha Sigma Mu, an honor society for materials science and engineering students. Palumbo plans to graduate in 2013.