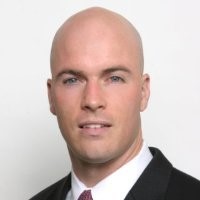 Rich Twilley recently joined the virtual law firm Athorus, PLLC as a patent attorney. Founded by Larry Harris in 2011, Athorus serves national clients, independent of the traditional ‘bricks and mortar’ paradigm with Twilley and Harris working from bicoastal home offices in Glastonbury and Seattle, respectively.  Prior to Athorus, Twilley practiced at McCormick, Paulding & Huber LLP.  After earning his B.S. in Civil Engineering at UConn, he served as a U.S. Naval Officer for five years. After that, he attended UConn Law, get his degree in 2004.   In 2012 and 2013, Twilley was named a Connecticut Rising Star in intellectual property by Super Lawyers magazine. He serves on the boards of the UConn Alumni Association and UConn Law School Alumni Association.

Momentum #1:  Why did you choose engineering?

Twilley:  I chose engineering because, for me, mere learning and knowledge weren’t enough.  I wanted to do something with what I was about to learn: to pick up the proverbial ball and sprint with it.  Because I saw the liberal arts as a scalar, and engineering as a vector, engineering was an easy choice.

Twilley:  There are too many to count.  UConn grew in so many transformational ways during my time there as both an engineering student and a law student, and so did I.  My memories of my time there shaped the rest of my life.

Twilley:  My classmates, neighbors and fellow students.  Since UConn is such a vibrant, diverse incubator of thought, you can learn almost as much from your peers as you can from the faculty.  Had I spent those years in a vacuum, the value of my degrees would be far less.

Twilley:  During college, I was selected for a nuclear engineering officer program with the U.S. Navy.  Six weeks after graduation, I was stationed at the Navy’s Officer Candidate School in Pensacola, Fla., for three months of high-quality face time with some U.S. Marines.  I was commissioned as an officer in September 1996, and spent five years in the Navy, including about three-and-a-half years aboard a nuclear-powered fast-attack submarine homeported here in Connecticut.  When my naval service was complete, I returned to UConn to enroll in the School of Law in 2001.

Twilley:  I try to get out to Storrs as frequently as I can.  My last visit was two weeks ago for an Alumni Association meeting, and frankly, I can’t wait to get back.

Twilley:  Yes, frequently, on a daily or even hourly basis.  My experiences as both an engineering student and a law student at UConn resulted in personal and professional relationships that framed my future and will last forever, and I rely upon them every day.

Momentum #7:  If you knew then, what you know now, how would that have affected you?

Twilley:  With the benefit of hindsight, I may have changed my major to something more appropriate for my service in the Navy (e.g., mechanical, electrical or chemical engineering) or for what I do today (such as computer science & engineering; I presently help clients patent and protect computer-related inventions).  One thing I would never do is revisit my choice to enroll in the School of Engineering

Twilley:  Here are two:  first, an engineering degree from the University of Connecticut can take you anywhere, from the bottom of the ocean to the top of the world.  With a UConn engineering degree, all things are possible, and you are limited only by the breadth of your dreams and the depth of your desires.  Second, even after you graduate, do whatever you can to maintain a relationship with UConn as an Alumnus — e.g., stay in touch with your professors, mentor a UConn student, buy season tickets, contribute to the UConn Foundation — and you will be repaid tenfold.  UConn needs the support of its Alumni now, more than ever.  After all, graduation is called “commencement,” a French word meaning “beginning,” for a reason.