Eight Questions With: Roland A. Boucher ’54

Speaking with Roland A. Boucher (B.S. Electrical Engineering, ’54), P.E., by phone, the 3,000-mile and 60-year distance from Storrs evaporates as he humorously recounts the undergraduate exploits that he and a close-knit cohort of Willimantic high school friends experienced. 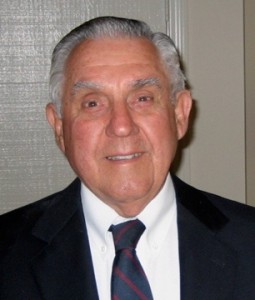 Graduating from UConn with distinction, Boucher’s good grades and drive earned him a full scholarship to Yale University where he received a master’s degree in engineering. From there, his love of aviation and Horace Greeley’s invocation to “Go West, young man,” propelled him to California and Hughes Aircraft Company where he embarked on a 25-year career. He went on from there to start two businesses. The first was AstroFlight Sunrise, which is now celebrating its 40th anniversary. It developed an unmanned experimental electric aircraft technology, which was the first aircraft to fly on solar power. Project Sunrise was funded by DARPA and administered by Lockheed Aircraft Corporation; the contract called for a “proof of concept aircraft powered solely by incident sunlight on the wing surfaces.”

Boucher’s a skilled raconteur, and you can picture the twinkle in his eye as he tells of his youthful resourcefulness – an important trait during wartime rations. With commercial fireworks unavailable, Boucher developed his own – a more highly explosive, less stable alternative. Too young to buy beer, the undeterred Boucher built the equipment to brew his own.  At 16, unbeknownst to his parents, he took flying lessons at nearby Windham Airport (then the Willimantic Municipal Airport). The entrepreneurial Boucher parlayed his flying skills – acquired before he could legally drive – into a business in which he shuttled air passengers conducting sponsored research at a government laboratory.

In 1980,  Boucher left Hughes permanently and formed Leisure Electronics, a small toy and hobby manufacturing company. There, he built and marketed a radio control electric model car that he conceived and developed five years earlier. Toy distributors showed little interest at first, but a few weeks after the first sales at a local toyshop, the car became a nationwide hit. In 1988, Boucher scaled back his involvement in the company to perform engineering consulting work for other companies.

After retiring from his position of chairman at United Californians for Tax Reform, Boucher applied his mathematical skills to analyze the Federal and California tax codes and forms.  His work was instrumental in the complete rewrite of the California short tax form, removing many unnecessary restrictions and automating the form to execute mathematical calculations.

More recently, his interest and research in ancient measurements drove him to discover that ancient Sumerians had in essence developed the metric system over 5,000 years ago.  That system and four refinements spread throughout the ancient world from China and Japan in the East, to Britain in the West; some evidence indicates it spread to the new World.  Boucher has presented his findings at several national conferences, including the June 2014 meeting of the American Association for the Advancement of Science (AAAS) in Riverside, CA.

Today, Boucher lives in Irvine, CA with his wife of 53 years, Nancy, and regularly flies his Piper Arrow plane.

He agreed to be our first alumnus for a regular feature we’re calling, “Eight Questions:”

Momentum #1:  Why did you choose engineering?

Boucher:  I knew that Science/Physics and Engineering were my interests and languages were NOT — so Engineering it was!

Boucher:  I had a great time at UConn – all four years.  No specific event stands out in my memory.

Boucher:  Probably my high school chemistry professor and school principal, and my father, who would not let me study for any test.  He only went through the 8th grade, but held firm that, “Learning is for life.”  Grades do not count – only what you remember for the rest of your life.  In other words, learning is for YOU – not for what someone else thinks about it at test time.

Boucher:  I attended Yale on a scholarship and received an M.S. in Engineering.

Boucher:  In 1990, when I visited a friend who retired from the Physics Dept. named Howard Ogushwitz.

Boucher:  Howard was the last one.

Momentum #7:  If you knew then, what you know now, how would that have affected you?

Boucher:  I am not sure.  Always an optimist, I was always ready to try anything.  Being brutally frank with persons of power frequently got me in trouble, but I am not sure I would want to change.

Boucher:  You are entering a great field where challenges await.  You will be building the world of tomorrow.  Just do each job as one you can be proud of, and success will surely follow.