In response to the USSR’s successful 1957 launch of the Sputnik space capsule into orbit around the Earth, a year later the U.S. established its own space program under the newly-formed National Aeronautics & Space Administration (NASA). Intent on educating the workforce that would be needed to propel America’s emerging space and increasingly sophisticated defense programs, universities nationwide responded by establishing aerospace engineering departments across the U.S. 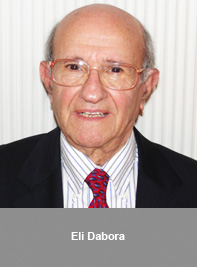 Joining the trend, in 1963 UConn inaugurated its Aerospace Engineering Department, with Dr. George Campbell as its first Department Head. Dr. Campbell lost little time in recruiting faculty for the young department, and in 1968 he hired Dr. Eli Dabora away from the University of Michigan, where Dr. Dabora had received his Ph.D. and remained as a Senior Research Engineer at the Aircraft Propulsion Laboratory.

With expertise in high speed combustion for propulsion, Dr. Dabora, who is now retired, brought considerable knowhow in the combustion characteristics of fuels. He was particularly interested in understanding the science of detonation, how to initiate or suppress it, and its possible application to propulsion.

When he arrived from the much larger University of Michigan, Dr. Dabora found the UConn environment to be a work in progress.

“The academic culture was different back then,” he remarked. “I was one of the few faculty members, along with Taylor Booth and a few others, who had written proposals and received outside funding for my research. In fact, I remember that Taylor tutored his fellow faculty members in the art of grant writing.  Since then, of course, UConn has become a fine academic institution with a strong focus on research.”

Another memory from his early days at UConn relates to the purchasing system.  “It was a pain in the neck to order equipment back then. When I tried to purchase a laser for the lab shortly after coming to UConn, the purchasing unit delayed the order for six months because there was only one supplier. They insisted there had to be competitive bids. That really slowed my efforts to build my research laboratory.”

Within a few years of his arrival at UConn, the infant Aerospace Engineering Department was dissolved and integrated within the Mechanical Engineering (ME) Department. At that point, Dr. Dabora joined the ME faculty but remained active in combustion research while teaching courses in thermodynamics, propulsion and combustion.

Among his research projects was a joint effort with United Technologies Research Center (UTRC) to examine oblique detonation for hypersonic propulsion as an alternative method of supersonic propulsion.  The project involved the development of laser-based diagnostics of the shock-induced combustion.  He also investigated new ways of igniting combustible mixtures in spark ignited engines.  Dr. Dabora’s influence in the combustion arena is underscored by his role as Chair of the Eastern Section of the Combustion Institute (1989-91) and receipt of the ICDERS Soloukhin Award (1993) for his unique experimental technique of complex combustion phenomena.

For many years, Dr. Dabora was the sole combustion researcher in the ME Department. That changed in 1987, with the arrival of Dr. Baki Cetegen, and today the department boasts five combustion experts who work closely with Connecticut’s aerospace and defense industry. Dr. Cetegen, who is Department Head of ME, collaborated with Dr. Dabora on a number of research projects over the years.  He credits Dr. Dabora with making important research contributions.  “He pioneered work on detonations in relation to the interactions of detonations with droplets and sprays.  He came up with innovative ways to create oblique detonation waves in an experimental setting.”

With the rise of the environmental movement and growing awareness of the impact of fossil fuels on air and water quality, Dr. Dabora began to examine the environmental effects of combustion with the aim of reducing pollutants.  One of his collaborations with Dr. Cetegen, supported by grants from ConnDOT and CT Transit involved testing of diesel fuels and technologies that were deemed to produce fewer pollutant emissions in diesel powered buses and other vehicles.

Looking back over his years at UConn, Dr. Dabora noted that he was most gratified by the opportunity to teach outstanding students.  “Most students agonize over thermodynamics, but there were always a few who really ‘got it’ right from the start.”

He recalls fondly one particular doctoral student, George Fox, who received his Ph.D. in Aerospace Engineering and was instrumental in helping Dr. Dabora set up his research laboratory.  “George assembled all of the equipment, with little oversight from me. He was just fantastic.”  [Following a long career with the State of Connecticut, where he applied his expertise in computing and rose to Executive Director of Information Technology, today Dr. Fox is President of JAG Consulting, LLC.]

Dr. Nejat Olgac, who worked with Dr. Dabora for many years, reminisced, “Eli shared an office next to mine, and I have wonderful memories with him as a guiding friend.  We used to enjoy going to the one-time Faculty Club for lunch at our weekly ‘French table,’ at which we tried to polish our French. The table was occasionally served by a French Canadian waitress who used to take our orders in French.  Eli and I had fun translating the menu from English to French, inventing a lot more than what ‘Petit Robert’ could provide.”

STEM in the Family

The engineering and science genes run strong in the Dabora family. Daughter Rebecca earned her Ph.D. in biochemical engineering at MIT and now practices as a biotech consultant.  Son-in-law Joseph Helble is Dean of the Thayer School of Engineering at Dartmouth and formerly a faculty member and Department Head of Chemical Engineering at UConn.  Sandra obtained her MD and Ph.D. degrees from the UConn Health Center and is now with Biogen-Idec; David obtained his MBA from UCLA and is Portfolio Manager at Robeco Boston Partners, institutional investors; Jonathan obtained his B.S. degree from UConn, Ph.D. in molecular biology from the University of California at Berkeley, and MBA from UCLA, and he is currently a business consultant in the biotech area.