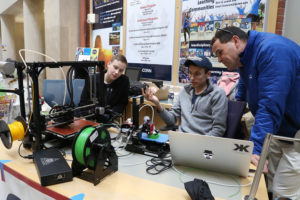 The UConn Entrepreneurship and Innovation Society held its first hackathon, HackUConn 2016 Smart Cities, on April 1 and 2. Hackathons are an opportunity for designers, engineers, and other interested individuals to come together and innovate hardware and software solutions to real problems. There have become regular events at institutions known for their innovative nature and this event demonstrates UConn’s support for hackathons and their relevance to learning.

Smart Cities are an attempt to integrate multiple information and communication tech solutions in a secure fashion to manage a city’s assets, including transportation systems, power plants, waste management, law enforcement and other community services.

HackUConn brought together student participants with industry and academic mentors and judges, along with a variety of resources such as 3D printers and other prototyping materials to aid in the experience. Food and coffee was provided to students, which proved particularly beneficial to students who never left the building for the entirety of the twenty-four hour event. In the early morning hour, some rooms were occupied by teams sitting around a table silently working to develop their product, participants debating over design options, or even some hackers taking a quick nap near their hacking space.

For more information on the event, check here. 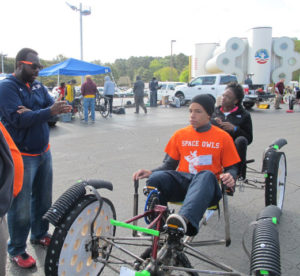 Taofeek Orekan, a UConn National Science Foundation Graduate STEM Fellow in K-12 education, served as advisor to a team of eight high school students from Hartford Public High School’s Academy of Engineering and Green Technology in the NASA Human Exploration Rover Challenge at the U.S. Space and Rocket Center on April 7-9. This is the second year Orekan led the team.

The Human Exploration Rover Challenge, previously known as the Great Moonbuggy Race, is an annual competition sponsored by NASA for high school and college students.

The teams designed, constructed, and tested pedal-powered rovers that had to go over a variety of landscapes designed to mimic planets, moons, asteroids, and comets. The teams also had to create their own wheels for the competition.

A gallery of the challenge can be found here.

Some of the impressive accolades our students have earned.

Cameron Flower, a Biomedical Engineering undergraduate student, was chosen as one of the 2016 Goldwater Scholars.  This is prestigious scholarship is given to college students who intend to pursue research career in the STEM disciplines. Cameron was also selected as one of the Biomedical Engineering Summer Interns at the National institute of Health.  This internship provides an opportunity to work on cutting edge biomedical research projects under the mentorship of scientists in National Institute of Health laboratories in Bethesda, Md.

Stephanie Knowlton has also been awarded a 2016 NSF GRFP. Her Biomedical Engineering research has developed a low-cost device composed of a cell phone and magnets to diagnose and monitor sickle cell disease. The device basically separates micro particles based on their densities and magnetic signature, which is useful for diagnostic applications. Her goal is to test the device, which attaches to and uses the camera of a smartphone for image analysis of blood cells.