Electrical Engineering professor Quing Zhu and UConn Health Center (UCHC) physician-researcher professor Molly Brewer, DVM, MD have received a $1.63 million, five-year grant from the National Institutes of Health to advance and test a novel hybrid imaging device for the accurate detection and characterization of ovarian cancer.  The grant was made through the NIH’s Research Project Grant (RO1) program.

Ovarian cancer, sometimes called the “silent killer” because it is typically diagnosed late in the progression of the disease, kills nearly 14,000 U.S. women annually and has a five-year survival rate of 47%.  Some women are at high risk for the development of ovarian cancer because they carry one or more inherited genetic mutations, commonly BRCA1 or BRCA2, which dramatically increase their likelihood of developing either ovarian or breast cancer, or both.  Some women in this high risk population elect to have their ovaries removed as a preventive measure. 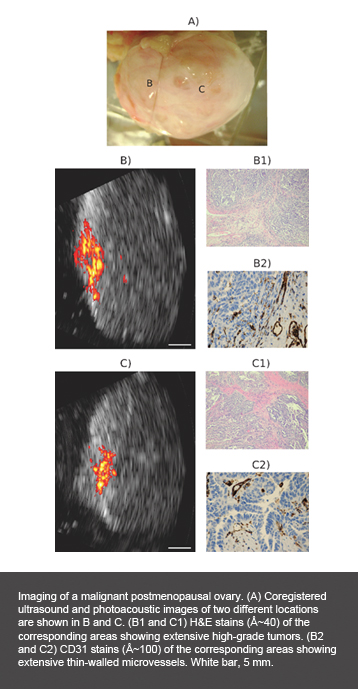 Dr. Zhu’s expertise lies in optical and ultrasonic imaging, biomedical instrumentation, breast and ovarian cancer detection and characterization.  She has invented a number of complex imaging devices to aid doctors in accurately detecting potential cancers and in discounting the presence of cancers – thereby reducing the rate of unnecessary surgeries.  Dr. Brewer is a nationally recognized gynecologic oncologist specializing in ovarian, uterine and cervical cancer malignancies. She has a long track record of working with biomedical engineers to develop novel imaging devices for ovarian cancer early detection and better characterization of the malignant potential of ovarian masses.

For this project, the team will construct and test a novel imaging probe that weds both photoacoustic and ultrasound techniques for dual-mode, non-invasive transvaginal imaging for the detection and characterization of ovarian cancer and abnormalities.  By co-locating the two techniques in one device, the probe exploits the advantages of the two different imaging technologies for superior cancer detection and characterization.  The photoacoustic technique is very effective in detecting unusual blood vessel growth and oxygen-deprived tissues that often signal the growth of tumors.  Ultrasound, which can penetrate deeper into tissue, allows doctors to detect abnormal changes and provide anatomic landmarks for superimposing the vasculature content obtained from photoacoustic imaging for improved diagnosis. 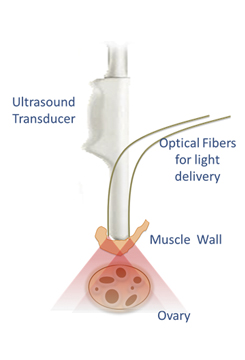 Based on preliminary studies, Drs. Zhu and Brewer believe the co-registered unit will improve the current clinical practice for non-invasive diagnosis of early stage ovarian cancers and ovarian abnormality and will guide surgical intervention of high-risk ovarian cancer patients.

Their scope of work will include the development and refinement of their prototype imaging probe.  They will also compare known normal, abnormal and malignant ovarian tissues, using both microscopic techniques and the dual-mode device, to identify differences among them that can be used to evaluate the device’s performance in accurately characterizing healthy and diseased tissue. For example, different tissues, including blood vessels and oxygenated cells, absorb and reflect light energy in discernable patterns that can be suggestive of their physiological properties and health.

They will also test the device on a number of distinct patient pools.  One pool will comprise women who are scheduled to undergo prophylactic oophorectomy, the surgical removal of the ovaries as a preventive measure.  For this group, tissue samples will be studied and then compared against the results predicted by the imaging device. This comparison will allow Drs. Zhu and Brewer to validate the sensitivity and specificity of the device.

Based on preliminary studies, Drs. Zhu and Brewer believe the co-registered unit will improve the current clinical practice for non-invasive diagnosis of early stage ovarian cancers and ovarian abnormality and will guide surgical intervention of patients at high risk of developing ovarian cancer.

Dr. Brewer notes, “The most exciting thing about this technology is it is completely noninvasive and may significantly improve the sensitivity, specificity and positive predictive value of ultrasound, enabling the researchers to determine whether there are areas inside a patient’s ovary that are abnormal without having to remove the ovary. The device may even allow us to reassure a young woman at risk for ovarian cancer that her ovaries are normal, which we currently cannot do, and thus avoid unnecessary surgery and premature menopause.”