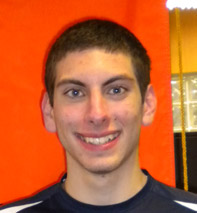 Michael has been involved in alternative energy projects since first arriving on campus. As a freshman, he joined the UConn chapter of the American Institute of Chemical Engineers (AICHE).  Over the past two semesters, he has contributed to the design of an alternative energy car that is to be entered into the AICHE Chem-E-Car competition next spring. The project has encouraged him to apply his knowledge of chemical engineering and mathematics to the production of alternative energy.  Now, with his University Scholar project, Michael is planning to take that exploration one step further.  His project involves the development of a novel type of fuel cell, one that will be cheaper and more stable than the current leading fuel cell.

Proton exchange membrane (PEM) fuel cells are the most common type of hydrogen fuel cell, often found in automotive applications.  A PEM is a material that will let only protons, not electrons, pass through.  In a PEM, hydrogen gas is placed on one side of the membrane and oxygen gas on the other.  The hydrogen then diffuses through the membrane, “trying” to combine with the oxygen.  The electron, however, cannot go through the membrane and is stripped off as the hydrogen proton passes through.  A wire connects both sides of the apparatus, allowing the free electrons to travel across the membrane to join with the hydrogen proton and oxygen gas to make water.  The passage of the electrons through the wire produces a current, generating electrical power.  The process has several drawbacks: first, it requires expensive metals, such as platinum, for the catalyst; in addition, the membrane can become unstable over time. Thus, Michael seeks to design an alternative, carbonate anion exchange membrane fuel cell to see what benefits that process may hold.

Anion exchange fuel cells work in much like PEM fuel cells except that instead of transferring protons across the membrane, a carbonate ion, CO32-, is transferred.  The carbonate ion is created when oxygen and CO2 come in contact with a catalyst crystal on the membrane.  Because the carbonate ion has a charge of -2, it has two extra electrons; these must be pulled from the other side.  This movement of electrons across the membrane creates an electrical current, generating power.  Anion exchange fuel cells require no precious metal catalysts, so they are less expensive than PEM fuel cells, and the membrane tends to be more stable.  Michael’s hope is that, eventually, cheaper fuel cells such as these can be used commercially, moving alternative energy forward and mitigating the damaging effects of climate change.

Michael is advised on his University Scholar project by Drs. William Mustain and Ranjan Srivastava, both of Chemical, Materials & Biomolecular Engineering, and Dr. Gerald Leibowitz (Mathematics).  After attaining his B.S. and an M.S. in math from UConn, Michael plans to get a a Ph.D. in chemical engineering.