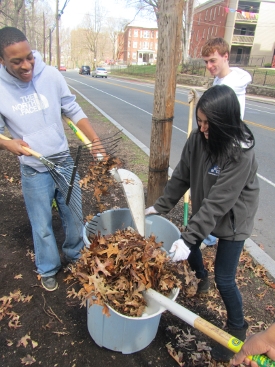 collaborative team-work and community service.  The students were enrolled in a class called Engineering for Impact, and Pope Park officials were impressed with the energy and enthusiasm with which the UConn students undertook their task.

Kevin McLaughlin, Director of the Engineering Diversity Program and an undergraduate instructor who oversees the Engineering for Impact class, said the idea for the class grew out of remarks made by engineering alumnus (Computer Science & Engineering, ’92) and entrepreneur Timothy “Scott” Case when he appeared as an invited speaker in 2010 to discuss social entrepreneurship.  Mr. Case, co-founder of priceline.com, and CEO of Malaria No More and Startup America – the private sector alliance launched in January to accelerate entrepreneurship – encouraged the School of Engineering to provide student groups a forum in which their outreach and philanthropic missions could be more fully developed and advanced.

According to Mr. McLaughlin, the Engineering for Impact class allowed members of five engineering organizations to further define their outreach and philanthropic missions, develop websites and promotional material about their organizations, and plan and effect mission-centered activities.  Student members of Engineers Without Borders, Engineering Ambassadors, the Society of Women Engineers, the National Society of Black Engineers and the Society of Hispanic Professional Engineers participated in the class.

As the end of the term approached, Mr. McLaughlin said the students were interested in participating in a class project that would allow them to work collaboratively on a community outreach project.  Through contacts in Hartford, they learned that Pope Park was in need of volunteers for a spring cleanup.  Pope Park, which was designed in the 1800s by the famed Olmstead Brothers Landscape Architects, includes athletic fields, a recreation center, a pond, and other features. Located near the Frog Hollow section, the park provides a gathering place for families. 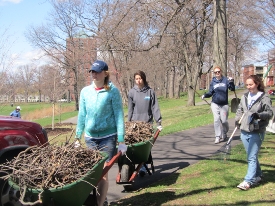 On a Saturday in mid-April the class descended on the park to help the Friends of Pope Park volunteers clean up debris and prepare it for seasonal visitors. The students spent six hours in the cleanup effort, impressing Friends president David Morin, who enthused, “The students all worked to pick up litter and debris, rake leaves, spread mulch and pick up dead branches. They presented themselves well and performed a valuable service. We are very grateful for the support of UConn’s engineering students.”

The students found the experience very rewarding and hope to do more of these activities in the future.