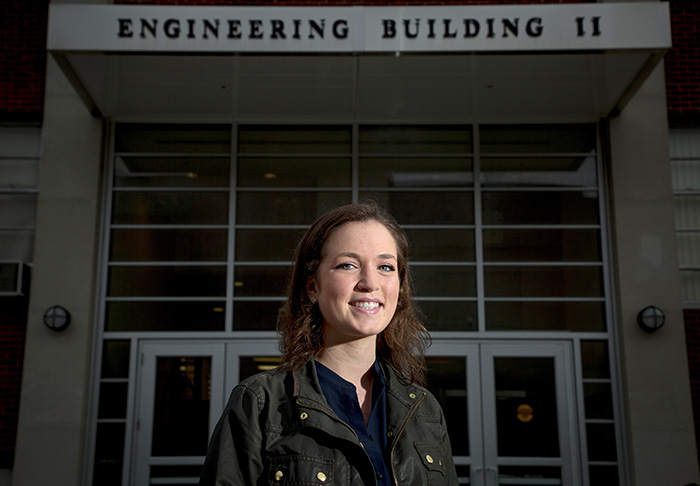 Lindsey Gilson, a senior studying Engineering Management for Manufacturing, was awarded Intern of the Year by the American Society of Engineering Education. (Gerry McCarthy/UConn Photo)

UConn Engineering senior Lindsey Gilson, who was named the UConn Co-op of the year for 2016, has also been named the Intern of the Year by the American Society for Engineering Education.

Gilson, a Management and Engineering for Manufacturing major, worked at Unilever for eight months. During her time at Unilever, Gilson led two projects that saved the company over $1 million and made inventory systems used across a number of states more efficient. Catherine Hernlem, a customer supply chain manager with Unilever, praised Gilson’s maturity and leadership.

“Lindsey Gilson was by far the most exceptional Co-Op that I have ever worked with at Unilever, truly an asset,” Hernlem said in a letter supporting Gilson’s nomination as the Intern of the Year. UConn refers to Gilson’s eight month stint at Unilever as co-op, while the American Society for Engineering Education defines Gilson’s term as an internship.

In January of 2016, Gilson traveled to Minneapolis to start her time with Unilever, where she was in charge of managing the inventory of Unilever mayonnaise and tea to a large chain of retail stores.

“That entailed managing inventory, pulling reports and a lot of data analysis. I learned a whole lot about Excel. You know how everyone puts ‘proficient in Excel’ on their resume? Now I can say that I still don’t know half of the things that it can do,” Gilson said.

In addition to her day-to-day responsibilities, one of Gilson’s projects involved improving on-shelf availability; making sure that products are available all the time. 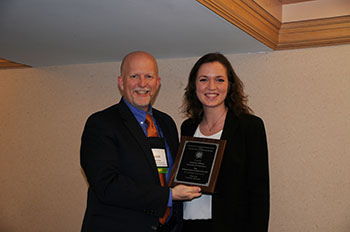 “The problem I addressed was when they said they had stock on shelves but it wasn’t really there. People would go to shelves and they would say ‘I really want this size of mayonnaise but it’s not there.’ They either don’t buy it or buy a competitors mayonnaise,” Gilson said.

Gilson found that the inventory system had flaws that caused it to report available products when none were present, and to also report that no items were available when there was a supply on hand. In response, Gilson created a system to more effectively monitor the inventory and accurately sense when stock was running low.

“The crowning achievement of knowing it would work was when we would take an item and track it online, from when it arrived [at the store] to four days after when the case would sell out. We would know [from the revised system], that there was an inventory, go to the store and have them redo the count. A lot of sales were getting lost,” Gilson said.

Her second major project involved refining a program created by an outside contractor that automatically manages orders for the large retailer Gilson worked with, which was used by four percent of the company’s distribution centers. The program was supposed to sense when a new order was required and automatically order new stock, but that aspect wasn’t working.

“It was just tanking in that one aspect, it was all backed up,” Gilson said.

The team Gilson was a part of had a meeting where they discussed the issue.  Afterwards, Gilson decided to fix the problem herself.

“One Friday afternoon, I sat down at 3 p.m. and didn’t stand up for four hours. I built this Excel document which essentially replaced the contractor’s system. No one really asked me to do that. We were on a call one day and everyone was so upset that I just took it upon myself to fix it,” Gilson said.

Gilson’s program addressed a flaw in the contractor’s ordering algorithm, which was making the process inaccurate. After the switch, Gilson’s system immediately began improving the ordering process, with a nine percent increase in effectiveness. The ordering issues were fixed within two weeks. The system she made was expanded and used in 12 percent of the retail company’s distribution centers and was eventually incorporated into the original program.

As a result of her exceptional work, Gilson was offered a place in the Unilever Future Leaders Programme. The program offers recent graduates a three-year rotation in three different jobs throughout the supply chain of Unilever, to help them become better leaders within the company. Gilson said that she was glad to be recognized for her hard work, while emphasizing that other students could excel like she did, if given the chance.

“I’m not one to try to get a lot of credit for what I do. I’ll just go about my way and not ask for much recognition. […] It’s good to know that people can recognize hard work and initiative,” Gilson said. “I think more students are like me, they just don’t have the opportunity to show it.  I’m very grateful to Unilever for taking a chance on me.”