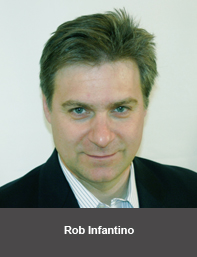 As an electrical engineer struck with an entrepreneurial spirit, Robert Infantino has never limited himself to any amount of success – and doesn’t plan on stopping any time soon.

Originally from New York City, Infantino moved to Danbury, CT at age 15 with his family in hopes of improving on the rough lifestyle of the city. He attended Danbury Public High School, where he excelled in math, architecture and problem solving. “It was this combined skillset that led me to study engineering,” said Infantino, “and UConn had a great engineering program. Plus, with its proximity to home, the decision to pursue UConn was an easy one.” In 1985, Infantino found himself with a B.S. in electrical engineering followed by a position at Raytheon Company, in Massachusetts, initially working on radar systems for the Canadian government.  “Although Raytheon is a great company, I discovered that I wasn’t wired for the pace at which it moved and the amount of time it would have taken to climb the corporate ladder. On my first year anniversary with the company, I decided to move on,” he said. “I wanted something more exciting, preferably a smaller company where I could make an impact.”  So off he went and never looked back.

After a few short stints at several small companies, in 1992 Infantino ventured out on his own and founded his first company, Acorn Software, which specialized in storage virtualization and archiving software for the enterprise market. The company produced several products with modest success. After three years he left Acorn to start AcerSoft in 1995, a reseller of system and storage management software to the mid-market. Then, in 1997, he became founder & CEO of storage resource management (SRM) software company, Astrum Software. Astrum’s products managed data for distributed networks and the company was subsequently acquired by EMC Corporation in 2003. At this point, Infantino was at a crossroads and faced with either working for a large company (EMC) or moving on. He decided yet again that corporate life was just not for him.

“In the early years of startups, I made many mistakes and that was mostly due to not having the proper guidance and the knowledge base that is readily available today,” Infantino said. After the Astrum acquisition, Infantino’s name circulated well in the Boston area. He became an advisor to several Boston-area startups. He was invited to work as an independent consultant for various venture capitalist firm portfolio companies, and quickly collected four clients in his first year. “I was essentially made part of the management team, providing guidance to other entrepreneurs, sharing knowledge I had gained, and in some cases doing some of the heavy lifting.” However, the demand for his time increased and Infantino found himself spread too thin across the clients, and though this work was lucrative, he decided to give up being a consultant.

At the end of 2005, Infantino decided to join one of his clients, a startup involved with storage virtualization software: Incipient, Inc. “I worked at Incipient for about four years. Incipient was well funded, backed by top-tier venture firms, and it was an exciting space to be in at the time. Following Incipient, I was recruited by the team at the Enterprise Strategy Group (ESG), an IT analyst and business strategy firm that operates globally. At ESG I served as a strategy consultant to help with their emerging company clients.” His ability to recognize market patterns and understand how to develop solutions that have a fit in the market made Infantino a valuable addition to the team at ESG. “With my experience and an understanding that my opinion has weight behind it, I’m able to give advice that had merit,” said Infantino. “I really enjoyed working with the team at ESG.” Infantino worked at ESG for just under 2 years.

Today, Infantino is working on his latest entrepreneurial endeavor, Openbay, Inc. Openbay is a big step away from the enterprise software world, but Infantino is looking forward to the challenge. Infantino envisions Openbay as an online trusted marketplace that matches consumer vehicle repair and maintenance needs with a network of local service providers that compete for the business. Consumers can easily compare offers, view customer-rated reviews on providers they have experience with, book an appointment based on their schedule and securely pay for the service – all online – all through Openbay. “Consumers are holding onto their vehicles longer due to the economic climate. The average age of a vehicle on the road in the U.S. is now over 11 years,” said Infantino. “The more miles you place on a vehicle, the higher the cost to maintain it. At Openbay, we are helping the consumer by lowering the cost of vehicle ownership and eliminating the hassle of calling around for the best pricing, availability and finding a trustworthy professional to get their vehicle serviced. It’s a very useful service and it’s free to consumers.”

Infantino remains connected to UConn with his involvement with UConn R&D. He serves as a member of its Board of Directors. UConn R&D is a for-profit subsidiary of the UConn Foundation that initiates new business start-ups based on innovative technologies developed by the faculty and staff.

With all that he has done in his lifetime, Infantino is never quite satisfied with his successes. “Today, the barriers and cost to introduce a new company to the market are at an all time low. This has led to a surge in activity from entrepreneurs across the nation,” he said.  With as much professional experience that Infantino has, he attributes some of his foundation building to his roots at UConn. “My time there taught me how to think critically and helped me establish my life goals.”

With the exception of his four years at Incipient, Infantino has essentially been on his own since 1992, and that’s the way he prefers it.  Although he didn’t mention any further startup ideas beyond Openbay, he did want us to know that there’s one thing we can be sure of: “Retirement is not in my vocabulary.”