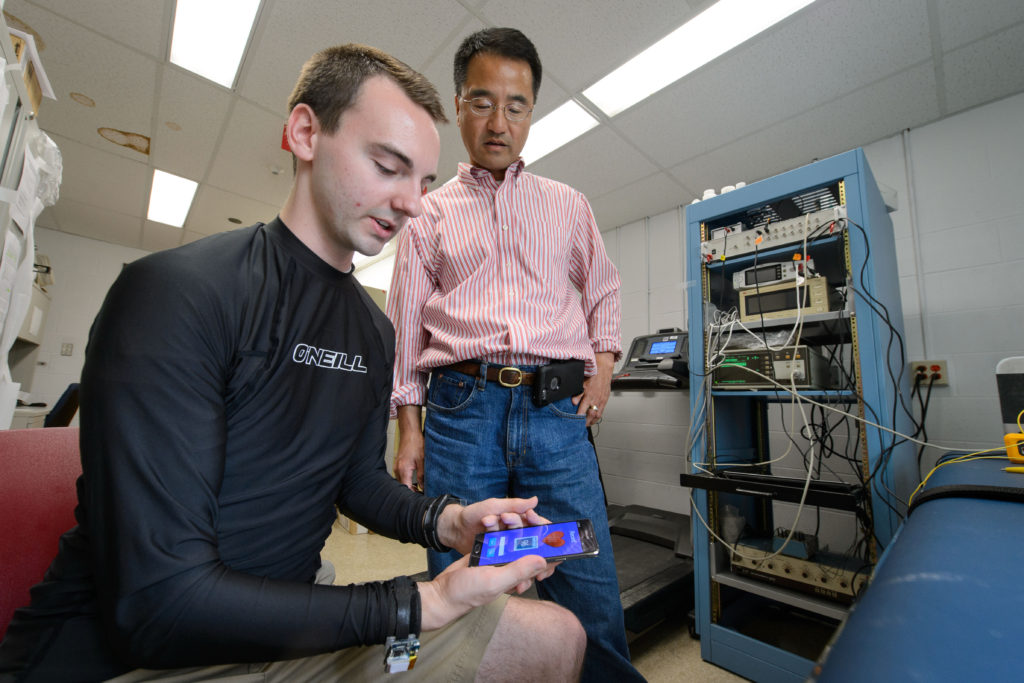 Cameron Flower, an engineering junior, is one of two Goldwater Scholars at UConn this year. Two other students were recognized with honorable mentions.

Four is the maximum number that can be nominated by any school. UConn’s two winners are among just 252 students nationwide selected as 2016 Goldwater Scholars from the 1,150 students put forward by their schools.

The Goldwater Scholarship is considered the nation’s premier scholarship for undergraduates studying math, natural sciences, and engineering. It was established by Congress to honor the late U.S. Sen. Barry M. Goldwater, with the purpose of identifying students of outstanding ability and promise, and encouraging them to pursue advanced study and research careers. Scholars receive one- or two-year awards that cover the cost of tuition, fees, books, and room and board up to a maximum of $7,500 per year.

Flower ’17, from Burlington, Conn., is an honors student majoring in biomedical engineering and pursuing minors in bioinformatics, information technology, and computer science. He attributes his success to the guidance of his UConn research mentors, Dr. Pramod Srivastava, director of the Neag Comprehensive Cancer Center at UConn Health; and professors Ki Chon (head of the Department of Biomedical Engineering); and Sahar Al Seesi (assistant professor-in-residence of computer science and engineering). “I am grateful to them for introducing me to the investigative process and igniting my passion for computational biology and bioinformatics,” he says.

Flower and the other UConn winner join the ranks of 15 other Goldwater winners from UConn since 2005, including seven awardees in the past four years, says Rowena Grainger, STEM Fellowship Advisor in the Office of National Scholarships & Fellowships at UConn.

“The Barry Goldwater scholarship is one of the most competitive and prestigious undergraduate scholarship competitions,” says Grainger, adding that the University’s success in producing Goldwater and other scholarship winners “is owed almost entirely to UConn’s strong investment in undergraduate research and the support of our faculty in mentoring these students.”

Goldwater scholarships are often a stepping-stone to future support for research careers, she says. UConn’s prior Goldwater scholars and nominees have garnered prestigious postgraduate fellowships or continued their impressive academic pursuits, including:

* A 2009 winner was awarded a U.S. Department of Energy Office of Science Graduate Fellowship.

* A 2011 winner is now pursuing veterinary and doctoral degrees at Tufts University.

* The rest are pursuing doctorates at prestigious U.S. institutions that include Harvard, the University of California-Berkeley, and Yale.

Following his freshman year at UConn, Flower was selected to work as a student researcher under Dr. Pramod Srivastava in the Center for Immunotherapy of Cancer and Infectious Diseases at UConn Health studying the immunogenicity of predicted tumor-specific cell markers. During his sophomore year, he performed statistical analysis for a study under Professor Ki Chon, head of the Department of Biomedical Engineering. For his work there, Flower was awarded the Deligeorges Family Scholarship in Biomedical Engineering last year.

He continued his research under Srivastava and Professor Sahar Al Seesi last summer, conducting a computational study investigating the immune evasion of melanoma tumors by differential gene expression analysis. He presented his work, “Melanoma Immune Evasion: A Computational Investigation of Differential Gene Expression,” at UConn Health and at the recent Frontiers in Undergraduate Research poster exhibition.

A dedicated scholar in the laboratory and the classroom, Flower was named a Babbidge Scholar (having earned a 4.0 GPA for the preceding two semesters), and has been inducted into several honor societies. He currently serves as vice president of the UConn chapter of Alpha Eta Mu Beta, the national biomedical engineering honor society, and was recently inducted into Tau Beta Pi, the oldest and most prestigious engineering honor society in the U.S.