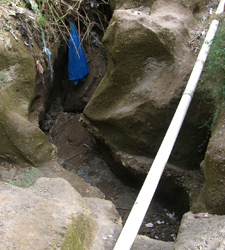 The UConn chapter of Engineers Without Borders (EWB) has gained official recognition from the national organization, clearing the way for the small chapter to proceed with an engineering remediation project that could improve the lives of over 1,000 impoverished people in rural Nicaragua.

Chapter president Nathan Barlow (Chemical Engineering), Nathaniel Bergan (Civil Engineering) and Dave Harrington (Environmental Engineering) traveled to Nicaragua during Thanksgiving break ’07 on a reconnaissance mission aimed at determining how to stabilize a key access road linking Granada with a large shantytown of squatters. With the official recognition of the national EWB organization, their plan to assure road access to the area called La Prusia may move forward over the next 12 months. A major challenge for the team will be to secure much-needed funding on the order of $20,000, according to Mr. Bergan, to cover the cost of heavy equipment rental, local laborers, and travel expenses for the small EWB team.

EWB-USA is a non-profit humanitarian organization that partners with developing communities worldwide to improve their quality of life while also providing students and practicing engineers the experiences that foster a global outlook. Projects take myriad forms but often include the development of renewable energy, clean water and even sustainable enterprises. The organization is so highly respected that its founder, Bernard Amadei, was inducted in 2008 into the National Academy of Engineering.

The UConn chapter is in its infancy after a number of earlier attempts to organize. The group currently enjoys strong support from a small, highly committed core of about seven students, according to Mr. Barlow. In addition to Mssrs. Barlow, Bergan and Harrington, the core members include Leslie Verissimo (Management & Engineering for Manufacturing), Jason Schinis (Biomedical Engineering/Eurotech), Robert Yau (Chemical Engineering) and Liz Hufnagel (Biomedical Engineering). The chapter is advised by Drs. Amvrossios Bagtzoglou and Mekonnen Gebremichael, with Drs. Maria Chrysochoou and Norman Garrick also serving as mentors. All are associated with the Civil & Environmental Engineering Department.

The EWB UConn chapter has set its sights on making permanent repairs to a two-mile stretch of a dirt road, in a rural area near Granada that is chronically washed out by torrential rains during the lengthy “invierno” season. Mr. Bergan said the downpours feed a natural stream bed that has formed across the road, often producing yawning holes 10-13 feet deep and rendering it impassible to traffic. The focused civil engineering challenge is part of a much larger socio-economic problem: along the roadway, over 80 squatter families have thrown up rudimentary shelters – frequently tin roofs suspended over four poles – to form a shantytown. More permanent housing, access to the city of Granada, and business formation are all hampered by the impassible path.

The road is just one facet of a larger mission. The team is collaborating with a Massachusetts-based nonprofit NGO, Casas de la Esperanza, which operates in Nicaragua to help the squatter families build or purchase their own houses, start businesses and nurture subsistence communities through social support mechanisms and interest-free micro-credit. According to a World Bank study, Nicaragua is the second poorest country in Latin America after Haiti, with over 45.8 percent of its citizens living – mostly in rural areas – in poverty in 2001. 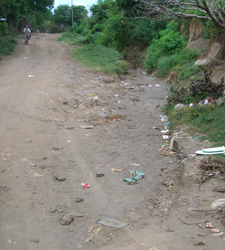 During their Thanksgiving visit to the area, Mrs. Barlow, Bergan and Harrington assessed the road, conducted watershed tests, and developed a strategy for diverting the water flow away from – and stabilizing – the road. They drafted a formal proposal that is currently being reviewed by an external referee before it is submitted to the national EWB for approval.

Gaining recognition as an official EWB chapter was a lengthy process. Mr. Barlow said that establishing the chapter required a series of prescribed steps, including securing various approvals, fundraising to secure the $400 application fee, submission of a proposal to EWB-USA and other measures. With this milestone behind them, the team looks forward to carrying out its Nicaragua mission next year and to identifying a new challenge that will allow them to apply their engineering expertise altruistically somewhere around the globe.