Dr. Marisa Chrysochoou, an assistant professor of Civil & Environmental Engineering, and two undergraduate members of the UConn chapter of Engineers Without Borders, received $15,000 in funding from the Environmental Protection Agency (EPA) to research indigenous solutions for stabilizing a chronically washed out roadway connecting the impoverished shantytown community of la Prusia, Nicaragua with the nearby historic city of Granada. 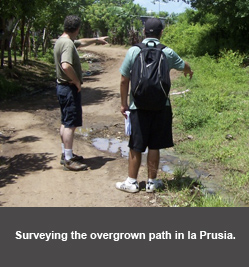 The chapter has set its sights on making permanent repairs to a portion of a roughly two-mile stretch of a path that links la Prusia with Granada. The dirt road becomes impassable each year due to seasonal torrential rains, which often produce deep crevices blocking motorized traffic. The focused civil engineering challenge is part of a much larger socio-economic problem: along the roadway, over 80 squatter families reside in rudimentary shelters – frequently tin roofs suspended over poles – to form a shantytown. More permanent housing; access to jobs, healthcare and education in Granada; and business formation in are all hampered by the inaccessible path.

The one-year grant was made under the EPA’s prestigious P3 program, a national student design competition for sustainability focusing on people, prosperity and the planet.

After obtaining roadway soil samples in la Prusia, and samples of local volcanic ash as well as residual lime from a nearby limestone operation that serves industrial and agricultural customers, the team will conduct initial laboratory tests at UConn to determine an optimum soil-material mixture that will resist erosion. Later, field tests will be carried out on-site along a portion of the road near la Prusia. In keeping with the EWB philosophy, the UConn team intends to use both locally-available materials and labor to stabilize approximately one mile of the roadway where the worst erosion produces yawning holes and crevices.

Members of the local community and of the participating NGO (Casas de la Esperanza) will be important partners in transporting the materials to the road site, blending the materials with the roadway soil, compacting it and monitoring its hydraulic capacity and durability. According to Dr. Chrysochoou, among the monitoring instruments the EWB team will install to judge the mixture’s performance are rain gauges, and thin steel rods that can indicate displacement of the underlying soil.  Vertical movement of the rods is indicative that the remedial admixture has not reduced erosion in the underlying soil. Scott noted the team hopes to deploy members of the community and NGO to check the gauges and record data.

While the road could be repaired using traditional Nicaraguan methods – application of a soil/volcanic rock foundation atop the dirt; buttressing of the roadway margins using quarried stones; and application of brick pavers atop the aggregate foundation – the method is costly and requires heavy trucks and professionals. For this reason, the EWB team hopes to devise inexpensive solutions that can be implemented by non-professionals. 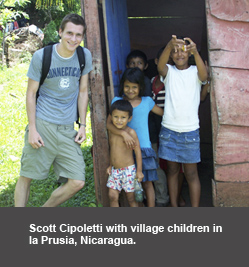 If the team finds its on-location test mixture does result in a long-enduring, stable road surface capable of withstanding the heavy deluges common to the area, they intend to apply for a second phase P3 grant of $90,000. The second phase would involve large-scale preparation and mixing of the ash, lime and soil on-site – either using a large front-loader truck or perhaps local laborers to perform the mixing – and compacting the mixture using a rolling to provide a smooth surface across the one-mile section.

Members Scott Cipoletti, Dana Boyer and Jorge Simbaqueba, along with their EWB Project Mentor Gerry Hardisty of Civil Engineering Services, LLC, traveled to Nicaragua for a week in August 2011.  The team will travel to Nicaragua in November to meet with city officials in Granada, NGO partners and residents of la Prusia; and they will make the trek again in 2012 as they continue to advance their project.

Please visit the UConn EWB website for details of the group’s activities.  To donate funds toward the chapter’s efforts in Nicaragua or Ethiopia, please follow this link.