The UConn chapter of Engineers Without Borders (EWB) has received $90,000 from the U.S. Environmental Protection Agency (EPA) to continue one of the chapter’s signature projects, aimed at permanently stabilizing a key travel artery linking an impoverished Nicaraguan village to a major city.

The grant is the second se 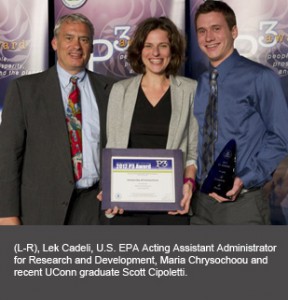 cured by the team under EPA’s P3 (People, Prosperity and the Planet Student Design Competition for Sustainability) program. UConn’s was one of just 14 teams selected from 45 participants to receive a second round of funding.  The successful proposal was developed by seniors (now graduates) Scott Cipoletti and Dana Boyer, along with EWB advisor Dr. Marisa Chrysochoou (Civil & Environmental Engineering). During the EPA’s 2012 National Design Expo in April, the team was also honored with an award in recognition of their Phase 1 P3-sponsored feasibility study encompassing lab and field work, which Scott and Dana presented during the expo.

La Prusia is an impoverished community of approximately 1,000 residents living in makeshift wood and tin houses.  The residents rely on a two-mile dirt road to link them with the colonial city of Granada, where jobs, schools and other opportunities await them.  Intense seasonal rainfalls chronically erode the road so severely that it becomes unusable by motorized vehicles. UConn EWB members aim to facilitate permanent road repairs using sustainable, local materials and labor, and to do so at minimal cost. A reliable roadway will enhance the quality of life for La Prusia residents.

Since 2008, members of UConn’s EWB chapter have been traveling to Nicaragua to interview La Prusia citizens, survey the roadway, negotiate with Granada’s city leaders, identify locally available low-cost materials for the repair work, and develop a plan for solving the chronic road erosion problem. Assisting them on the project are volunteers associated with the U.S.-based NGO Casas de la Esperanza.  Watch a video of their most recent site visit here.

In researching solutions, EWB-UConn members learned that standard methods of road stabilization in the region involve either resurfacing the road using a composite of volcanic rock and ash, which is easily eroded, or paving the road with cement or asphalt, which is prohibitively expensive for residents of the impoverishe 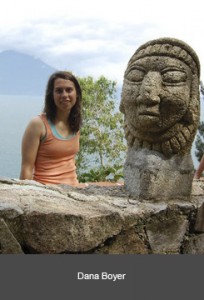 Across the 2011-12 school year, under the guidance of Dr. Chrysochoou, Dana and Scott conducted experiments both in the laboratory and in the field in order to test the potential of lime kiln dust, an industrial by-product that is produced by a nearby plant, to stabilize the road against erosion. Additionally, Scott and Dana worked with their respective Civil and Environmental Engineering senior design teams to design hydraulic controls for the water flowing on the road. Civil Engineering (CE) seniors – Russell Dutta, Matt Greer and Scott designed culverts and a system of diversionary pipes to transport the rainwater off the road toward an existing dry creek bed located adjacent to the road.  Meanwhile, a team of Environmental Engineering (EnvE) students – Chris Berthiaume, Chris Restrepo and Dana – designed a series of trenches, rolling dips and steps intended to contain and decelerate the water flow.

While all of the team members graduated in May, a new EWB-Nicaragua team will continue with the project starting in the fall. Joining CE junior Bryan Hallinan, the new EWB-Nicaragua project chair, will be fellow CE students Michael Burhlis and Ashley Koscis. They expect to begin the road repair project in November 2012 and to complete it in spring 2013.

Dr. Chrysochoou notes that former team leaders and project leads Scott and Dana will begin studies toward master’s degrees in the fall: Scott at Cornell University and Dana at the University of Cambridge.

Companies and individuals wishing to contribute to UConn’s EWB-Nicaragua project should contact Kylene Perras at kperras@foundation.uconn.edu.