After a nearly 40-year hiatus from the University of Connecticut, solar panels have returned to the School of Engineering with the installation over the summer of two new 3.3 kW panels at the Center for Clean Energy Engineering (C2E2) on UConn’s Depot Campus.

The novel hybrid photovoltaic (PV) power system, designed by Dr. Peng Zhang and his group, serves as a valuable testing apparatus enabling engineering faculty and students to explore a variety of research projects in PV energy production and transmission. Power utilities encounter two main challenges incorporating solar energy into their distributed generation system, due to: the problem of fluctuating power generation arising from the ever-changing sun insolation (a measure of the sun’s radiation that actually reaches the Earth’s surface); and the difficulty in meeting interconnect standards governing distributed PV system connection.  These challenges are at the core of research underway at C2E2 by faculty members associated with the state-funded Eminent Faculty Initiative in Sustainable Energy. 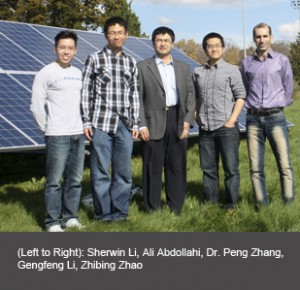 Photovoltaic cells are made of semiconducting materials such as silicon. When light strikes the cell in the form of photons, some portion of the spectrum is absorbed by the semiconductor material, transferring energy to the semiconductor. In the process, electrons are released from their bonds and allowed to flow freely; in this fashion, sunlight is transformed into usable energy.

Drs. Zhang and Sung-Yeul Park, along with their graduate students, are exploring ways to (i) quantify the probability that the PV system will require enhanced maintenance to improve the overall system reliability and (ii) to increase the energy conversion efficiency of the PV system by minimizing losses resulting from the inverter’s conversion of electricity from direct current (DC) to the alternating current (AC) that feeds into the power grid. Recently, Dr. Zhang’s team has developed a systematic, quantitative approach to evaluate the reliability performance of grid-connected PV systems under varying sunlight levels and different component failure rates.  Dr. Zhang is currently investigating the PV microgrid, PV-based electric vehicle charging and smart PV interconnection technologies.

A different challenge – how to build a better and more cost-effective solar cell – is the focus of Civil & Environmental Engineering assistant professor Alexander Agrios’ work. Dr. Agrios is using titanium dioxide (TiO2) nanoparticles, which are very small semiconductors that provide a very large surface area upon which photosensitive dye is applied, to manufacture dye-sensitized solar cells. In contrast with conventional designs, which rely on silicon, Dr. Agrios says that dye-sensitized solar cells offer a radically different way to collect solar energy and offer cost savings due to the fact that they are produced using less expensive materials.

He explains that although the TiO2 method is slightly less efficient than conventional silicon – both because the dye molecules absorb a narrower spectrum of light, and there is electrochemical energy loss from the transfer of electrons from the electrolyte solution to the dye – it is more than counterbalanced by reduced manufacturing cost. Dr. Agrios is exploring ways to boost the efficiency of the dye-sensitized solar cells by improving the rate of electron transport kinetics. “There are a lot of good things about TiO2, but it can take milliseconds for an electron to be transported out of the cell, which is a relatively slow rate. We want to enhance the process; the faster we can get the electron out of the cell, the more efficient the process.” He and his team are looking at different materials combinations to enhance the cell efficiency. They are also testing different nanocatalysts, including nano-platinum, to reduce energy loss in the cell.

Interest in solar energy has waxed and waned in the U.S. for decades, as the price and availability of oil and gas have similarly see-sawed. During the 1970s, the U.S. experienced serious oil shortages that led to gas rationing, long lines of cars queued at gas stations to refuel, and inflation as the cost of goods rose in sync with the price of oil.  In response to the unstable energy environment of the times, Congress and many states introduced incentives for businesses to develop alternative energy sources – including solar thermal and solar photovoltaic technologies – and rebates for businesses and homeowners who installed them.

According to alumnus Michael T. Boyle (‘76, ‘81, ‘84), now an Associate Professor of Mechanical Engineering at the University of Maine, “During the mid-70s, at the height of the gas wars when fuel was being rationed, most engineers were involved in some kind of alternative energy research…windmills, solar collectors, hydro and the like.”  Dr. Boyle was a graduate student when he was drawn into the solar energy field by UConn professor Wallace Bowley, who directed UConn’s Energy Center.  Dr. Boyle’s thesis advisor, Dr. Lee Langston, also encouraged him to pursue solar energy, which was enjoying enormous momentum at universities across the nation.

A major feature of the Energy Center was a solar collector testing and certification program.

David Jackson (B.S. ‘63, M.S. ‘64), Vice President – Mechanical Engineering at Fuss & O’Neill in Manchester, was a graduate student and lecturer in Mechanical Engineering at UConn during this period. He explains that the incentives exclusively targeted solar thermal collectors used to heat water; the (then) extremely high cost of photovoltaics rendered them largely infeasible for all but defense and aerospace applications. Mr. Jackson notes that energy was becoming a critical issue for the nation, and it was during this time that the U.S. Department of Energy was formed, as a single presidential cabinet-level department, from a merger of various energy-related government programs.

Mr. Jackson recalls, “With the tax incentives, there was an initial flurry of interest. Everybody started making solar collectors. Not everyone knew how to make well-performing collectors. It was recognized that there was a need to be able to characterize the performance of the units. The National Bureau of Standards established testing protocols for heated liquid and heated air style collectors. For solar collector manufacturers to receive the tax incentives, their units had to undergo performance (efficiency) testing and pass certain standards.”

“This led to the establishment of testing facilities that, in turn, needed to be certified,” he says.  The American Refrigeration Institute certified testing facilities, and Jackson notes that UConn was among the first test facilities certified to test both air and liquid heating collectors using natural sunlight. The certification process was developed by the National Bureau of Standards and administered by the Air Conditioning and Refrigeration Institute (ARI).

It was Dr. Bowley, Director of the Energy Center, who championed a testing facility at UConn.  A team of faculty and students built the testing apparatus atop Engineering II.  Mr. Jackson recalls that EII had a second roof back then, consisting of a sort of deck with cedar planking, on which the researchers constructed three test rigs with racks that could be tilted toward the sun as its angle changed across the seasons. The laborious process required the agile researchers to heft panels, wiring, hoses and other weighty equipment up stairwells to the sun-drenched roof. “We also installed an instrumentation building to contain our data collection instruments. These included a microprocessor data collection system designed by a team of electrical engineering students overseen by J. Michael Callahan (B.S. ’82).

Over a six-year period, the lab tested and rated over 75 different collectors submitted by manufacturers.  Besides the on-campus testing and certification center, the Energy Center also performed field tests and inspections throughout the state, particularly during summers.

A 1979 Hampton Gazette news story reported that “…the Center now is running the statewide inspection program for the $400 HUD solar domestic hot water grants; it regularly tests manufacturers’ solar collector designs in accordance with ASHRAE test standards (if the collectors don’t meet the standards, owners using them can’t qualify for the $400 grant).”

The significant rebate made certification a must, and soon, “Word got out, and we quickly received contracts with the Federal Highway Administration, which installed demonstration panels for a domestic hot water heating system in a rest area off I-84; another project involved a passive solar retrofit of a ConnDOT highway maintenance garage in Glastonbury.”

Road to the White House 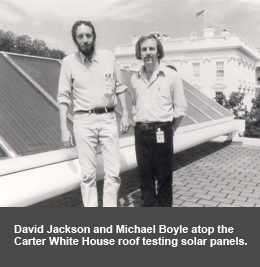 The team’s reputation led to one particularly interesting episode.  President Carter was dedicated to the idea of reducing not only the nation’s, but also his personal reliance on foreign oil.  So in 1979, as he announced an ambitious energy goal for the U.S. – 20 percent of the nation’s energy use from solar by the year 2000 – President Carter installed four banks of eight panels on the roof of the White House to provide hot water to the Oval Office dining room.  The panel manufacturer was a Connecticut company that knew of UConn’s solar certification program, and soon the General Services Administration awarded the job of testing and balancing to Dave Jackson and Mike Boyle. Dr. Boyle says the testing involved performing various efficiency measurements, including temperature, flow rate and the like. The experience proved interesting to both men, who recall being shadowed by Secret Service men for the duration of their testing and balancing efforts.

Sadly, just as the price of oil dropped precipitously in 1986 due to a large surplus, the White House panels sprung a leak and, rather than repair them, President Ronald Reagan had them dismantled and transported to a new home at Union College in Maine.  A few years later, Dr. Bowley died unexpectedly, and the solar collector test laboratory was removed from the roof of EII to facilitate building additions and renovations.

Mr. Jackson and Dr. Boyle are gratified that today, the work they began decades ago is enjoying renewed interest at UConn.  As the winds of geopolitics and energy supplies blow in unpredictable ways, UConn is helping to develop more sustainable energy technologies and sources that will provide the nation with a greater portfolio for the future.

The Carter White House panels have been blown by the winds of time and political will: today, one panel each resides at Unity College in Maine, the Smithsonian’s National Museum of American History, the Carter Library and the Solar Science and Technology Museum in Dezhou, China.