UConn researchers are adapting methods for studying forces in earthly structures for use in spacecraft. 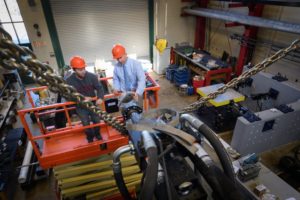 Civil and environmental engineering professor Richard Christenson and his research group, in partnership with Pioneer Aerospace, are using a cyber-physical test method to study the reaction forces involved in launching the parachutes that help spacecrafts land on distant planets. They hope their expertise, hard work,and careful calculations will lead to safer and more efficient missions into space.

Christenson’s group typically studies movement in terrestrial structures, such as bridges and skyscrapers, so it may seem surprising to find a piece of the Mars Pathfinder in his lab. But the same math that’s involved in vibrations within a structure on earth apply to those within a spacecraft.

“We’ve developed very specific techniques here at UConn,” says Christenson. “We have the right equipment, the right computers, and the knowledge to carry out this type of project.”

Simply landing safely on a planet after many months of travel through space involves a lot of potentially jarring forces. In the case of a rover such as the Pathfinder, when the spacecraft has reached its destination planet, it must enter the atmosphere and land safely. Parachutes slow the rover’s descent, and also orient the craft so the heat shield is positioned properly.