Drs. Yaakov Bar-Shalom, Peter Willett and Krishna Pattipati – all professors of Electrical & Computer Engineering – participated in the 15th Fusion Conference in Singapore.  Dr. Willett serves as chair of the Awards Committee.  Dr. Bar-Shalom delivered one of only three plenary lectures at the conference, just days after presenting the IEEE Distinguished Lecture at the Singapore Defence Science Organization.

In May, Connecticut Governor Dannel Malloy signed CT Senate Bill 33 authorizing ConnDOT to use “design-build” in lieu of the customary design-bid-build process in state construction projects.  SB 33 was strengthened by research conducted at the Connecticut Transportation Institute by Assistant Research Professor Dr. Eric Jackson with funding from the Connecticut Academy of Science & Engineering.   Gov. Malloy noted the legislation will make Connecticut more competitive in the quest for federal money and make “long overdue investments in our infrastructure, all while lowering the cost and improving the quality of construction projects.”

Dr. Ramamurthy “Rampi” Ramprasad (Chemical, Materials & Biomolecular Engineering) is a co-organizer of a symposium to be held during the 2012 Materials Research Society’s Fall Meeting in Boston from November 25-30. The Symposium QQ theme is “Materials Informatics” and focuses on the concept of rationally designing materials with novel properties through the use of computational methods, which forms the core of the recent U. S. Whitehouse Materials Genome Initiative. His colleague, Dr. Pu-Xian Gao (CMBE) is a co-organizer of Symposium K: “Hierarchically Structured Materials for Energy Conversion and Storage” focusing on assembly and fabrication strategies for the creation of hierarchically structured inorganic and organic materials. 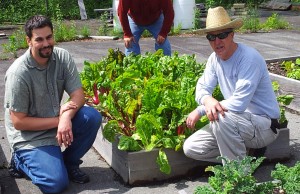 Six students at the Ella T. Grasso Southeastern Technical High School in Groton, with oversight and guidance provided by UConn Engineering doctoral student Jason White and GK-12 Partner Teacher Larry Fritch, have won an MIT InvenTeams Excite Award for a proposed compost water heating system. The group will now be considered for a $10,000 grant to complete the project. Jason is a GK-12 Fellow who has been working with Grasso Tech students and teachers over the last two years to enhance student interest in engineering as part of a National Science Foundation-sponsored program in the School of Engineering.

The compost water heating system was first demonstrated during the Big Green Battle contest at Grasso’s Technology Fair in May.  Sixty Grasso Tech students showcased their innovative, environmentally friendly projects before judges representing Grasso Tech, UConn and the business community, who rated the students’ devices or designs for relevance, creativity, practicality and feasibility. Awards were presented to the compost water heater and other projects, including an old plastic sandbox converted into a mini-greenhouse, and heat transfer from sewage plant effluent project. The Tech Fair attracted a number of State policy makers, including former US Congressman Rob Simmons, State Sen. Andy Maynard, and State Rep. Elissa Wright.

Dr. Owen F.J. Devereux, professor emeritus of Metallurgy, passed away on June 30. Dr. Devereux received his B.S., M.S. and Ph.D. degrees in metallurgy at the Massachusetts Institute of Technology.  He joined UConn in 1968 after a successful career in industry that included employment with Chevron Research, the Corning Glass Works and the Chevron Oil Field Research Co. Dr. Devereux served as Department Head of Metallurgy beginning in 1983. In 1988 he established UConn’s Center for Grinding Research and Development. His research interests included corrosion, electrochemistry and grinding of ceramics, and he authored more than 50 technical publications along with a graduate textbook, Topics in Metallurgical Thermodynamics (1983). He retired in 1999 but remained active with the Institute of Materials Science at UConn until recent years. He leaves behind his wife, Livi; and four children and their families; and countless friends.