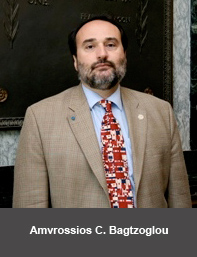 Dr. Amvrossios “Ross” Bagtzoglou, Head of the Department of Civil & Environmental Engineering, has been elected a Fellow of the Institution of Civil Engineers (ICE).   Dr. Bagtzoglou received his Ph.D. from the University of California – Irvine in 1990 and joined UConn in 2002.  Earlier in his career, Dr. Bagtzoglou was an assistant professor at Columbia University and a Senior Research Engineer at Southwest Research Institute.  He has published more than 60 refereed journal papers and received almost $3M in grants during his academic career.  Dr. Bagtzoglou is internationally recognized for his pioneering work on inverse methods for groundwater pollution source identification.  He serves as Associate Editor of Stochastic Environmental Research and Risk Assessment and has served as Associate Editor for Inverse Problems in Science and Engineering, Water Resources Research, Environmental Forensics, and Journal of the American Water Resources Association.  The 80,000 member ICE is a qualifying body, a center for the exchange of specialist knowledge, and a provider of resources to encourage innovation and excellence in the civil engineering profession worldwide.  Founded in 1818, it was granted a royal charter in 1828 with the aim to “foster and promote the art and science of civil engineering.” 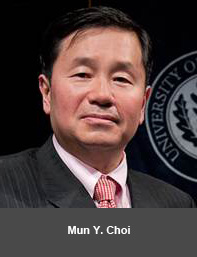 Dr. Mun Y. Choi, Dean of the School of Engineering and a Professor of Mechanical Engineering, was elected a Fellow of the American Society of Mechanical Engineers (ASME).  Dr. Choi joined UConn in 2008 after serving previously as Department Head of Mechanical Engineering and Associate Dean for Research at Drexel University.  He received his Ph.D. from Princeton University in 1992. Dr. Choi has made significant contributions to the understanding of microgravity droplet combustion and development of new experimental techniques for accurate soot measurement that are widely used in the fire and combustion research.  He has also developed and led innovative programs for undergraduate and graduate teaching, K-12 teacher and student outreach to enhance diversity, leadership in Pi Tau Sigma, and development of national graduate fellowship programs.  In 2011, Governor Dannel P. Malloy appointed Dr. Choi a Board Member of Connecticut Innovations, and the same year, Connecticut Senate President Pro Tempore Donald E. Williams appointed him to the Board of the Connecticut Clean Energy Finance and Investment Authority.  He was elected to the Connecticut Academy of Science and Engineering in 2009. Dr. Choi will step into the role of Interim Provost at UConn on June 1, 2012.  The new class of Fellows includes 137 new inductees; just 3,200 of the society’s 120,000 members hold the rank of Fellow.

The work of Dr. Bryan Huey (Chemical, Materials & Biomolecular Engineering) and three members of his research team, Drs. R.N. Premnath, S. Lee and N.A. Polomoff, was featured on the cover of the April 2012 issue of the Journal of the American Ceramic Society.  Their paper, entitled “High Speed SPM Applied for Direct Nanoscale Mapping of the Influence of Defects on Ferroelectric Switching Dynamics,” reviews the team’s development and application of high speed atomic force microscopy techniques to investigate the switching process in data storage materials.

Dr. Huey notes that the paper documents the highest spatial and temporal resolution of directly observed switching steps, the fastest images published to date, the first mapping of nucleation times and growth velocities crucial to the switching efficiency, the observation of fatigue caused by multiple switching events, and measurement of the spatial and energetic distribution of defects that influence switching dynamics including grain boundaries, indentation sites, and microcracks.