Dr. Cato T. Laurencin, a Professor of Chemical and Biomolecular Engineering and designated University Professor at UCONN has been named a Fellow of the American Chemical Society. 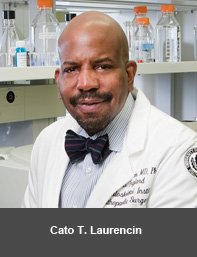 “The scientists selected as this year’s class of ACS fellows are truly a dedicated group,” said ACS President Tom Barton, Ph.D. “Their outstanding contributions to advancing chemistry through service to the Society are many. In their quest to improve people’s lives through the transforming power of chemistry, they are helping us to fulfill the vision of the American Chemical Society.”

Laurencin, an internationally recognized engineer, scientist and orthopedic surgeon, holds the titles of University Professor and Albert and Wilda Van Dusen Distinguished Professor of Orthopaedic Surgery. He also is a Professor of Materials Sciences and Engineering, and a Professor of Biomedical Engineering. He is the director of UConn Health’s Raymond and Beverly Sackler Center for Biomedical, Biological, Physical and Engineering Sciences and founding director of UConn Health’s Institute for Regenerative Engineering.  He is the Chief Executive Officer of UConn’s cross-university translational institute, the Connecticut Institute for Clinical and Translational Science.

“This is a great honor,” Laurencin said. “The American Chemical Society is one of our nation’s largest science organizations and has made great contributions to the field.”

Laurencin was cited for his seminal contributions in polymer science and polymer-ceramic systems applied to biology.  Well-known for his groundbreaking work in biomaterials, he has patented and invented a number of breakthrough technologies. These include the L-C Ligament, the first bioengineered matrix that completely regenerates ligament tissue inside the knee. A  Fellow of the American Institute of Chemical Engineers, Dr. Laurencin was named one of the 100 Engineers of the Modern Era at its Centennial celebration.  He is an elected member of both the Institute of Medicine of the National Academy of Sciences, and the National Academy of Engineering.

The Pratt & Whitney Additive Manufacturing Innovation Center at UConn has been awarded a contract for a project designed to optimize the use of alloys in additive manufacturing.

The contract comes from America Makes, the National Additive Manufacturing Institute that focuses on developing 3-d printing technology. The project is awarded in partnership with Optomec, the Albuquerque-based developer of metal printers. It also has the support of the U.S. Air Force.

Rainer Hebert, director of UConn’s Additive Manufacturing Innovation Center, said the center’s role will concentrate on the analysis of power particles. Specifically, they will be looking at particle size and analyzing for suh impurities as carbon, hydrogen nitrogen, oxygen and sulfur.

Hebert said the project is designed to develop a uniform process for using the technology.

Hebert said the center will be working with the Connecticut Center for Advanced Technology, Inc. (CCAT) on the project. Work will begin in the fall, he said.

– Guiling Wang (CEE) received a $137,725 grant from the Department of Energy for his project Hydraulic Redistribution of Water through Plant Roots – Implications for Carbon Cycling and Energy Flux at Multiple Scales. Daniel Gage (Molecular and Cell Biology) is co-investigator.

– Jeff McCutcheon (CBE) honored with FRI/John G. Kunesh Award, presented by the Separations Division of AIChE to recognize outstanding contributions in separations technologies for individuals under the age of 40.