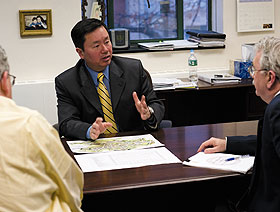 Engineering Dean Mun Choi was named to the Board of Directors of the Clean Energy Finance and Investment Authority (CEFIA) by Governor Dannel P. Malloy on September 13.  CEFIA, created in July 2011, absorbed and expands upon the former Connecticut Clean Energy Fund.  The agency’s mission is to promote, develop and invest in clean energy and energy efficiency projects in order to strengthen Connecticut’s economy, protect community health, improve the environment, and promote a secure energy supply for the state.  CEFIA will leverage public and private funds to drive investment and scale-up clean energy deployment in Connecticut.

Dean Choi was also named to the Board of Directors of Connecticut Innovations (CI) by Senate President Pro Tempore Donald E. Williams, Jr.  CI provides strategic capital and operational insight to push the frontiers of high-tech industries such as energy, biotechnology, information technology, and photonics. Since 1989, CI has helped over 100 emerging companies research, develop, and market new products and services.

►Dr. John Ivan, professor and Associate Department Head of Civil & Environmental Engineering, has been selected to serve as a 2012 ABET Program Evaluato

r.  ABET is the recognized accreditor for college and university programs in applied science, computing, engineering, and technology. The board accredits over 3,100 programs at more than 600 colleges and universities worldwide.  Dr. Ivan will commence training for his role in January 2012.

► With the start of the new 2011-12 term, seven faculty members were awarded permanent academic tenure and promotion to the rank of Associate Professor:

► Estimation and Tracking: Principles, Techniques, and Software, co-authored by Dr. Yaakov Bar-Shalom and his colleague X.R. Li, was recently released as a two-volume set in the Russian language. The original textbook, published by Artech House in 1993, was updated by Drs. Bar-Shalom and Li in 2001.  Dr. Bar-Shalom notes that the Russian language volumes are for the 1993 edition because the translation took more than 10 years.

► A study conducted by Dr. Norman Garrick, associate professor of Civil & Environmental Engineering, and former graduate student, Dr. Wesley Marshall (Ph.D. 2009; now an assistant professor at the University of Colorado-Denver) was profiled in an online article, “Debunking the Cul-de-sac appearing on the website The Atlantic Cities, on the subject of community design. Drs. Garrick and Marshall researched street network patterns in Davis, CA, known for the highest rate of bicycle commuters in the country, and also compiled data on 230,000 crashes spanning 11 years in 24 medium-sized California cities.  Their studies led them to conclude that cities planned on a traditional grid pattern had far fewer deadly accidents than cities designed and built in more elaborate, curvy patterns.  On average, they found, people who live in more sparsely populated, elaborately designed communities drive about 18 percent more than people who live in dense grids. The researchers summarized their findings in a June article appearing on the Planetizen website.