A research team lead by Dr. Robert Gao has won a “Best Paper Award” at the 2012 ASME/ISCIE International Symposium on Flexible Automation, held in St. Louis, MO in June 2012.  The paper, “Viscosity Measurement in Injection Molding Using a Multivariate Sensor,” describes a sensing method that quantifies multiple parameters critical to the quality control in polymer processing and wirelessly transmits the measured data through acoustic waves for remote information retrieval.  The paper results from a collaborative effort between Dr. Gao’s group at UConn (with graduate student Navid Asadizanjani and Assistant Research Professor Zhaoyan Fan) and Prof. David Kazmer in the Polymer Engineering department at UMass Lowell.  This research has been supported by the Civil, Mechanical and Manufacturing Innovation (CMMI) Division of the NSF. 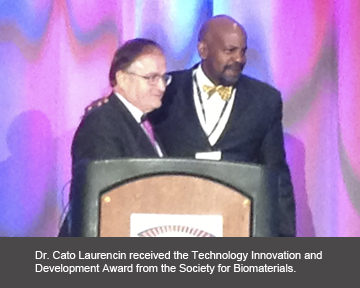 Dr. Cato Laurencin, M.D., Ph.D., was presented the Technology Innovation and Development Award from the Society for Biomaterials. Dr. Laurencin is CEO of the Connecticut Institute for Clinical and Translational Science, Director of the Institute for Regenerative Engineering, the Van Dusen Endowed Chair in Academic Medicine and a professor of Chemical & Biomolecular Engineering.  The award recognizes an individual or team who provided key scientific and technical innovation and leadership in a novel product in which biomaterials played an important and enabling role.  For more than three decades, Dr. Laurencin has conducted research studies on biomaterials for musculoskeletal tissue engineering, nanotechnology, and drug delivery.  He notes that he was influenced by his Ph.D. mentor, Dr. Robert Langer, an Institution Professor at MIT. Read more about Dr. Laurencin here.

ate Department Head of the Chemical & Biomolecular Engineering (CBE) department effective July 1, 2013. His responsibilities include chairing the department’s Undergraduate Committee; serving as the point of contact for students, families, and visitors; and working with the Department Head, faculty, and staff to ensure the department’s needs and responsibilities are addressed to the fullest extent. Dr. Mustain has held a number of leadership positions within the department, most notably as Chair of the Graduate Committee from 2009-12 as well as the head of the department’s accreditation preparation process. Dr. Mustain came to UConn in 2008, following a postdoctoral fellowship at the Georgia Institute of Technology. He received his Ph.D. from the Illinois Institute of Technology in 2006.

Professor emeritus John L.C. Löf died April 10, 2013.  Dr. Löf, who was 97 years of age, joined UConn’s Electrical Engineering faculty in 1952 and taught at UConn until his retirement in 1976.  Dr. Löf also taught courses in computer programming and served as Director of the university’s first Engineering Computer Center, where he spent thousands of hours helping faculty, staff and students understand the use of computers.  He first gained experience with computers as a graduate student at MIT, when Dr. Löf participated in the development of the first generation of electronic computers that were used to assist the military effort during the Second World War. Following retirement, he remained active as a professor emeritus, assisting undergraduate and graduate students in the use of the computers to perform the work required for their studies.  Dr. Löf is survived by his son Richard J.A. Löf and Richard’s wife, Anna and their daughter Alessandra. Contributions may be made in John’s name to the Mansfield Center for Nursing and Rehabilitation, 100 Warren Circle, Storrs, CT 06268 or to Hospice of Eastern Connecticut, 34 Ledgebrook Dr., Mansfield Center, CT 06250 or a charity of the donor’s choice.   For an online memorial guestbook, please visit www.potterfuneralhome.com.