Dr. Faquir Jain, professor of Electrical & Computer Engineering, has been named a Fellow of SPIE.  He will be formally inducted, and honored for his scholarly achievements, in 2013. Fellows are distinguished members who have made significant scientific and technical contributions in the multidisciplinary fields of optics, photonics, and imaging. SPIE is an international society advancing an interdisciplinary approach to the science and application of light.

Dr. Lee Langston, professor emeritus of Mechanical Engineering, recently published a featured column in Global Gas Turbine News on the topic of bird/jet engine collisions (p. 51). He references a U.S. Department of Transportation report indicating that bird strikes have increased from 1,770 reported in 1990 to 9,840 in 2011.

nd Professor in Sustainable Energy within the Mechanical Engineering Department, has been elected a Fellow of ASME.  Fewer than 3% of the organization’s 117,500 members rise to the rank of Fellow, which recognizes exceptional engineering achievements and contributions to the engineering profession. 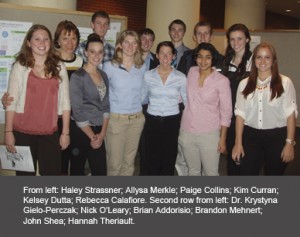 Dr. Krystyna Gielo-Perczak (Biomedical Engineering) organized, for the second time, a New Frontiers in Biomedical Engineering conference for undergraduate students. The conference took place during her Introduction to Biomedical Engineering class, which has an enrollment of over 95 sophomores and juniors. Dr. Gielo-Perczak reports that she mentored the students to help them refine their projects, which culminated in formal presentation by 28 teams describing their concepts for new medical devices or methods.  She also encouraged her student to participate in a Neuroscience in Storrs conference as means to initiate a multidisciplinary dialogue across the UConn campus.