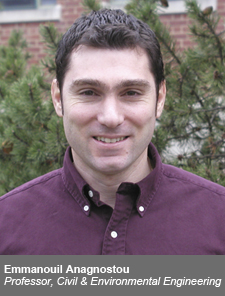 Dr. Emmanouil Anagnostou, a professor of Civil & Environmental Engineering, has been selected the next Director of the Environmental Engineering (ENVE) Program.  He will take the reins from Dr. Guiling Wang, who has held the position since 2009, effective June 1, 2012.  Dr. Anagnostou’s research addresses fundamental questions concerning the analysis and prediction of atmospheric and surface hydrologic processes and variables at both weather and climate scales.  An Associate Editor of the Journal of Hydrology, Dr. Anagnostou has received numerous honors since joining UConn in 1999, including a NASA New Investigator Award in 1999, National Science Foundation Early Career Development (CAREER) Award and the European Geophysical Union’s Plinius Medal in 2002, and the international Marie Curie Excellence Award in 2005. He held the United Technologies Professorship in Engineering Innovation (2008-09), and currently holds the NU Endowed Chair in Environmental Engineering (2009-). Last year, Dr. Anagnostou received the UConn Alumni Association’s Faculty Excellence in Research Award and was inducted into the Connecticut Academy of Science and Engineering.

hinae Jang, assistant professor of Civil & Environmental Engineering, has been invited to participate in the 2012 ASCE Excellence in Civil Engineering Education (ExCEEd) teaching workshop, as an “ExCEEd 2012 Teaching Fellow.” The week-long ExCEEd workshop will be held at the U.S. Military Academy at West Point in July.  Dr. Jang was selected for the honor based on her commitment to excellence in education and her service as a future role model for effective teaching at UConn. For the program, she will prepare and present three lectures: Basic Structural Analysis, Advanced Structural Analysis, and Structural Health Monitoring and Sensors to a small group of peers. 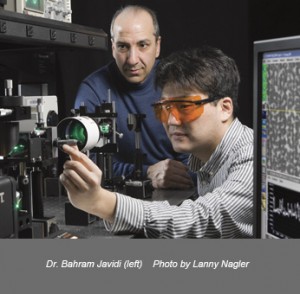 Board of Trustees Distinguished Professor Bahram Javidi (Electrical & Computer Engineering) will receive one of two 2012 University of Connecticut chapter of AAUP’s Research Excellence Awards during an April 3 event at the State Capitol Building. Dr. Javidi is a Fellow of the IEEE, American Institute for Medical and Biological Engineering, Optical Society of America, European Optical Society, International Society for Optical Engineering, Institute of Physics, Society for Imaging Science and Technology, and Institution of Electrical Engineers. In 2008, he was named a John Simon Guggenheim Foundation Fellow and presented the IEEE Donald G. Fink Prize Paper Award.  In 2007, he received the Alexander von Humboldt Foundation’s Humboldt Prize for outstanding U.S. scientists, in 2008 he received the SPIE’s Technology Achievement Award, and in 2005, Dr. Javidi received the Dennis Gabor Award in Diffractive Wave Technologies from the International Society for Optics and Photonics (SPIE).

Dr. David P. Lindorff, professor emeritus of Electrical Engineering, died March 15th at the age of 89. A veteran of World War II, he was one of the last surviving members of the Radiation La, a top-secret project in Cambridge, MA that led to the placement of radar on aircraft. He taught at UConn from 1951 to 1979. During his years at UConn, he wrote the book, Theory of Sampled Data Control Systems (Wiley, 1965) about analog computers. Following his early retirement from UConn, he became a licensed Jungian analyst.

UConn alumna Kylene A. Perras (’01), who joined the University of Connecticut Foundation in 2011 as Program Director of Leadership Giving, has been named Assistant Director of Development for the School of Engineering. She will work closely with Donald Swinton, Assistant Director of Development, to foster closer and more enduring relations with engineering alumni.  Kylene holds a B.A. in political science and psychology from UConn and an MBA from Southern Connecticut State University.  Earlier in her career, Kylene lobbied the state and federal governments on behalf of Murtha Cullina’s Government Affairs Group, specializing in higher education and healthcare advocacy.