Dean Mun Y. Choi is a collaborator on experiments aboard the International Space Station (ISS) aimed at improving fire-fighting techniques in space and understanding fuel combustion on Earth.  The team’s experiments are revealing some interesting findings.  The team’s Flame Extinguishment Experiment (FLEX) was concluded in December and appears to demonstrate that when a flame surrounding a fuel droplet extinguishes, in roughly 12 of the experiments, a heptane droplet continued to shrink at the same rate as when the flame was burning – which indicate a new paradigm in droplet combustion.  The team will spend time analyzing the experimental results to better understand these and other reactions even as a second round of experiments is undertaken aboard the ISS.  The interdisciplinary research team includes colleagues from UC San Diego, Princeton University, UC Davis, Cornell University, the National Center for Space Exploration Research and NASA’s Glenn Research Center.

Cato T. Laurencin, M.D., Ph.D., chief executive officer of the Connecticut Institute for Clinical and Translational Science and a professor of both Orthopedic Surgery and of Chemical, Materials and Biomolecular Engineering, was appointed to serve on the National Advisory Council for Biomedical Imaging and Bioengineering (NACBIB) of the National Institute of Biomedical Imaging and Bioengineering (NIBIB).

NIBIB is a unit of the National Institutes of Health dedicated to improving the fundamental understanding, diagnosis, treatment and prevention of disease through biomedical technology research and training. The NACBIB advises the NIBIB on matters concerning policy and program priorities, and participates in the review of all applications for funding of research and training grants or cooperative agreements by the NIBIB.

Dr. Laurencin, who was elected to the National Academy of Engineering in 2011, is an expert in shoulder and knee surgery and an international leader in tissue engineering research. Read more about Dr. Laurencin here. 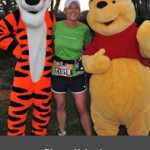 On January 7th and 8th, the School of Engineering’s own Dianna Hyland ran a combined 39.3 miles in two races at Walt Disney World in Orlando, FL.  The two races, collectively called the Goofy Challenge, featured courses that took the runners all around the Disney complex.  Dianna, an Administrative Services Assistant in the Engineering Dean’s office, ran a half marathon on the 7th and a full marathon on the 8th.  Both races had an early start, beginning around 5:40 am.  “It was dark when I started the half-marathon and by the time I finished it was still relatively early in the morning,” Dianna said.

The full marathon course took her through all the parts of the park, from Epcot through the Magic Kingdom, Animal Kingdom, Hollywood Studios and finally back to Epcot.  Dianna finished the marathon with a time of 3:40:19, placing 11th in her division of 966 runners.  Despite running a half marathon the day before, she was only seven minutes off her personal best time of 3:33.  Dianna began running seriously in 2003, with the Goofy Challenge marking her seventh marathon.  While the idea of running almost 40 miles in a 28 hour period may seem unthinkable to some, Dianna said she had a lot of fun.  “There were Disney characters all along the course, which was cool.  The race was very well organized and the course was really nice,” she said.