First Large-Scale Open Testbed in the Nation for Underwater Networks

An interdisciplinary team of researchers from UConn and three partnering universities is developing a suite of open underwater network testbeds that will be demonstrated along the U.S. East, West and Gulf Coasts, where water quality data will be continuously collected and transmitted to on-shore labs.  The devices can be outfitted with a variety of sensing technologies to capture a variety of data about the aquatic environment, including salinity, pH, temperature, chemicals and pollutants, hypoxia, turbidity and other characteristics. 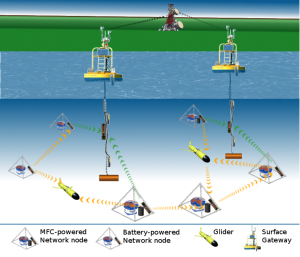 The research team, headed by Dr. Jun-Hong Cui of Computer Science & Engineering (CSE), includes fellow UConn faculty – Drs. Shengli Zhou of Electrical & Computer Engineering and Zhijie (Jerry) Shi of CSE, along with Dr. James O’Donnell of Marine Sciences – and partners at the University of Washington, University of California at Los Angeles, and Texas A&M University.  The core UConn team is associated with the Underwater Sensor Networks (UWSN) Lab at UConn, which is co-directed by Drs. Cui and Zhou.

The impetus for the project, notes Dr. Cui, is the growing need for ocean exploration and monitoring.  Today, it is recognized that oceans play a vital role in regulating climate, storing and releasing CO2, producing nutrients and foods, and transportation. No open system is currently in place for broad monitoring and data collection by underwater-based networked arrays in oceans around the globe.

According to Drs. Cui and Zhou, their patented networked communication devices fill an important niche, because so-called community testbeds have been infeasible until now, lacking a common platform to evaluate and compare various communication and networking algorithms and protocols. Additionally, the expense involved in deploying and maintaining underwater networked sensing testbeds is prohibitive for most researchers. Drs. Zhou and Cui are confident their networked suite will allow for continuous data collection across a common platform, in a wide spectrum of aquatic environments, and reduce the high cost for researchers.

The central feature of the Ocean-TUNE devices is a high-performance underwater networked acoustic modem initially developed at UConn and later transformed into a robust commercial product by a UConn spin-off company.  The design overcomes major challenges presented by the ocean environment: poor transmission of radio waves in water and low acoustic bandwidth, long propagation delays, and high error rates.  Significantly, the devices are capable of transmitting data up to 3-5 km away, according to Dr. Cui, and the apparatuses are protected by a housing that can withstand the harsh ocean environment.  Outfitted with a solar panel and battery, the units can remain functional continuously now, though alternative energy systems are being explored, including a microbial fuel cell (MFC) being developed by Dr. Baikun Li (Civil & Environmental Engineering) and Dr. Lei Wang (Electrical & Computer Engineering) at UConn. 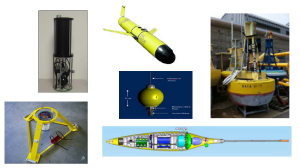 To date, Dr. Cui said, the units have been tested both near the shoreline and at greater distances from shore for periods of up to six weeks in Long Island Sound, where they successfully collected and transmitted data. Earlier tests targeted Chesapeake Bay, the open Atlantic Ocean and Taiwan Strait, where they performed well over extended periods.

Long-term, with four testbeds in Long Island Sound, Hood Canal – a finger-like offshoot of Puget Sound, Santa Monica Bay, and Texas’ Galveston Bay, the team expects to keep the suite operating round-the-clock and to make the data collected available to anyone with a cellular phone, according to Dr. Cui.  Furthermore, the team plans to allow researchers around the world to schedule “time shares” on the networks, adapted with sensors to capture data of interest.  The suite is attractive not only to the research community but also to a myriad of industrial and governmental interests.  Environmental organizations could use the devices to detect oil spills in the Gulf or chemical releases from manufacturing plants along the shoreline; the military might – for example – use the devices to detect chemical traces associated with mines; and the fishing industry may seek data about the health of food fish populations.

“It’s very exciting. This is going to be the first testbed of its kind in the world,” says Dr. Cui.