For Caitlin Oswald ’09, it is Rocket Science 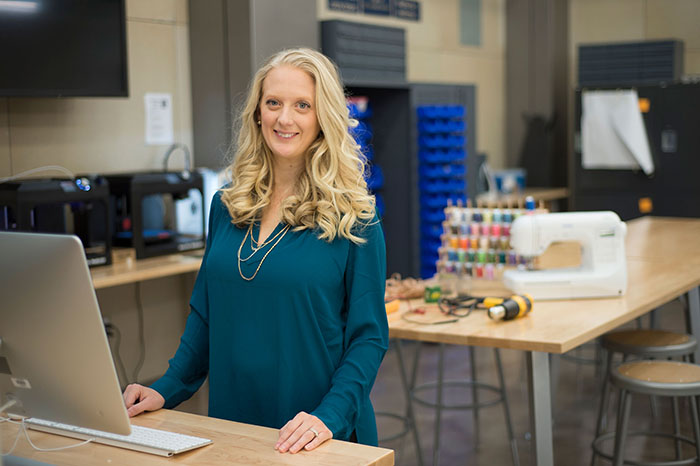 By Michael Hardy
This story originally appeared in UConn Magazine.

Growing up, Caitlin Oswald always wanted to be a ballerina. Then, in high school, she enrolled in an introductory engineering course called Scientific Principles. Oswald was the only girl in the class of 15. “We did electronics and robotics, and we built LEGO cars, and pneumatics, and all that stuff,” she remembers. “I absolutely loved it, and I think I did better than all the boys did. They all tried to cheat off me, and I wouldn’t let them.”

Today Oswald is a mechanical engineer at LAI International, a leading aerospace and defense contractor. In 2015, Fast Company magazine named her to its annual list of the 100 Most Creative People in Business for her pioneering work in additive manufacturing. Oswald said that if she hadn’t taken that high school course, her life might have taken a very different path. “That gave me confidence that being an engineer was definitely achievable. It wasn’t this big, scary thing in the sky.”

A Man’s World
Engineering is still an overwhelmingly male-dominated field, with women making up only about 15 percent of the profession. To boost that number, the University’s School of Engineering offers an annual summer program called BRIDGE for accepted freshmen from underrepresented groups, including women, African-Americans, Hispanics, and Native Americans. Oswald was one of the program’s beneficiaries, spending five weeks on campus in the summer before her freshman year taking engineering courses.

Oswald excelled at the coursework, and by the end of the summer she had won a scholarship from the aerospace giant United Technologies, which would later lead to summer internships at the company.

At UConn she became one of only 10 or 12 female mechanical engineering students out of a total group of around 100. “It took a little bit of getting used to at the beginning that there were so few women, but by the end I almost considered it a benefit, because everybody knew who I was,” Oswald said. “I wasn’t lost in a sea of people. If I called one of my professors and said, ‘This is Caitlin,’ they knew exactly who I was.”

After earning bachelor’s and master’s degrees in mechanical engineering at UConn, Oswald took a job at the United Technologies subsidiary Pratt & Whitney, where she helped design high-tech aircraft engines. She became an expert in the emerging field of additive manufacturing, which uses 3-D printing technology to simplify the design process for complex products. “With subtractive manufacturing, you start with a big block of material and you machine off what you don’t need,” Oswald explains. “With additive manufacturing, instead of starting with a big block, we start from nothing and only build material where we need it.”

Additive manufacturing was revolutionizing the field of mechanical engineering, and Oswald was becoming known as a leading expert in the field. At Pratt & Whitney her team developed new technologies that ended up in various platforms, including the Airbus geared turbofan jet engine that uses 16 percent less fuel and significantly reduces C0² emissions. The team used 3-D printing every step of the way, creating life-size models of the engine parts to study how they could be improved. “With additive manufacturing, the iteration of designs is very fast — you get a much quicker sense of how an assembly goes together, where the high-stress locations are on a part,” she says. “It’s very helpful to have a visual for that.”

Her work on the Airbus engine earned Oswald a place on Fast Company’s 2015 list of the world’s most creative businesspeople. The magazine flew Oswald and many of the other honorees to L.A. to participate in a conference on creativity and to tour area businesses, including Jessica Alba’s line of baby-care products, The Honest Company. “That was a very cool thing,” Oswald said. “I had never met a celebrity like that before.”

Embrace It All
Last October Oswald left Pratt & Whitney to join LAI International, a smaller aerospace and defense contractor where she was given the opportunity to assume a more prominent national role in the development of additive manufacturing. She gives regular talks to industry trade groups and is now on a team that is creating the material and product specifications that will be adopted by the Federal Aviation Association and the Department of Defense.

Oswald still gets frustrated at the lack of women in engineering. Part of the solution, she says, is to provide early encouragement and opportunities for girls to explore the STEM (science, technology, engineering, and mathematics) fields. “I think it’s really important to introduce women to STEM at an early age,” she said. “And then you have to maintain their confidence in middle and high school.”

She also emphasized that becoming an engineer doesn’t mean you have to abandon your other interests. Although she never became a professional ballerina, Oswald still enjoys dancing. “My goal when I talk to younger girls who are contemplating STEM is to tell them that you can do engineering and still be the person you want to be. If you love science and technology, you can do that and still be a fashionista. You can embrace all those things about you that make you who you are.”