From Engineering To Patent Judge

After graduating with an electrical engineering degree from UConn in 1993, Judge Jean R. Homere discovered by happenstance the field of patent law – a field that he believes to be largely unknown among engineering students across the country, despite the many exceptional opportunities it stands to offer them. 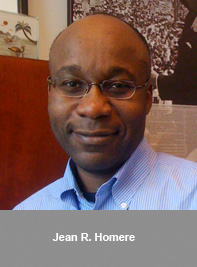 Currently an Administrative Patent Judge at the United States Patent and Trademark Office (USPTO), Judge Homere has steadfastly worked his way up the corporate ladder for the past 17 years. He was hired by a UConn alumnus in 1994 to work at the USPTO as a Patent Examiner, reviewing patent applications to determine whether claimed inventions should be granted a patent.  Simultaneously, he was pursuing his graduate studies at various universities in the Washington, DC area. By 2003, Judge Homere had acquired his law degree from George Mason University and transitioned to new role as a Supervisory Patent Examiner managing technology units of 15 Patent Examiners.  Next, he became a Legal Advisor at the USPTO’s office of patent legal administration, providing legal assistance to USPTO personnel regarding various matters pertaining to patent law. Presently, Judge Homere hears appeals pertaining to adverse decisions of Patent Examiners on patent applications in electrical, computing, and business methods disciplines.

The USPTO hires anywhere from 1,000-1,200 engineers each year, and serves as an excellent outlet for like-minded individuals.  According to Judge Homere, all engineering students should be made aware of this type of career opportunity. They should not have to “stumble into it” serendipitously.

Although his current success can be attributed to years of hard work and education, Judge Homere still reflects upon his choice of majors, and the decision to come to UConn, as among the best decisions he could have made. “[UConn] truly was a great experience overall,” he said. “The engineering program was excellent, and my advisors, Professors Charles Knapp and Rajeev Bansal, helped me along every step of the way. UConn provided me with a well-rounded education, and I owe a lot of my success to that program.”

In between earning his BSE degree at UConn and his JD degree from George Mason University in 2003, Judge Homere also earned an M.S. in Information Systems from George Washington University in 1997 and a Master of Legal Administration degree from Marymount University School of Business three years later.  He is a member of the DC Bar and the U.S. Court of Appeals for the Federal Circuit.