From the SoE Archives

We like to look forward here at the School of Engineering (the motto, after all, is “Engineering the Future”), but it’s always a good idea to occasionally stop and take a look back. Hence, our new feature, “From the SoE Archives.” 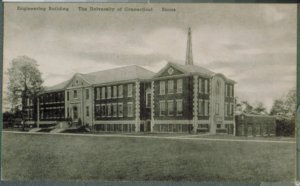 Before 2014 runs out on us altogether, let’s acknowledge a milestone. This year marks the dodranscentennial (75th anniversary) of the Castleman Building. It was originally called the Engineering I building (although it was actually the second dedicated engineering building on campus). The building was renamed in 1970 for Francis L. Castleman, the dean who served from 1946 to 1954. Castleman is home to both the Civil & Environmental Engineering department and the Engineering Deanery – as well as the team that humbly toils away to bring you Momentum every few weeks.

It was completed for about $300,000, and an additional $130,000 was spent for laboratory equipment. The building originally was 48,776 square feet, but underwent a major renovation and expansion that began in 1991 and was completed in 1995.

Do you have a piece of School of Engineering history that you want to know more about? Let us know, and email William Weir at weir@engr.uconn.edu.