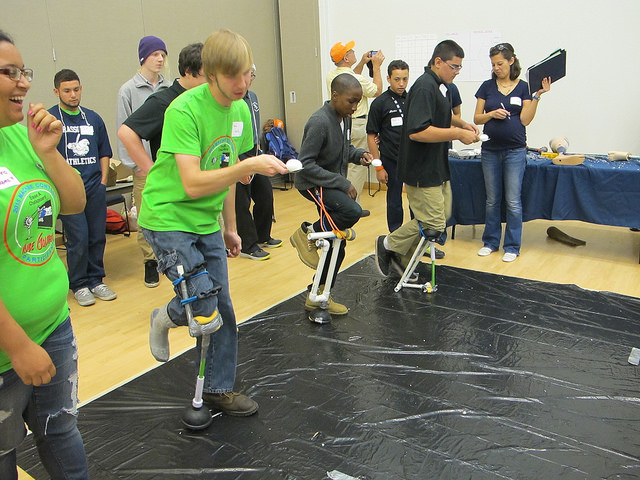 The egg-holding competition, which tests for the stability of the prosthetic

PVC pipe, duct tape and some sponges might not sound like the most promising materials for making a prosthetic leg, but nine high school teams came up with some surprisingly effective designs. The students were taking part in the latest Engineering Design Challenge held by the Graduate STEM Fellows in K-12 Education, or GK-12 for short.

Before the competition, all nine teams made prototypes of the legs at their respective high schools. At the Student Union Ballroom, where the competition took place, the trick was to improve on those initial designs. The challenge sparked a number of creative ideas. Some teams adopted a biomimetic approach. The Prince Tech team, for instance, modeled their prosthetic leg after the different parts of the foot – a doorstop for the heel, a curved pipe for the toes and a sponge as the sole.

Wolcott Tech’s design boasted an ingenious shock absorber, created by cutting a narrow space in the PVC pipe and strategically using a bungee cord that allowed a second pipe to move up and down upon impact. It received a number of compliments from observers. 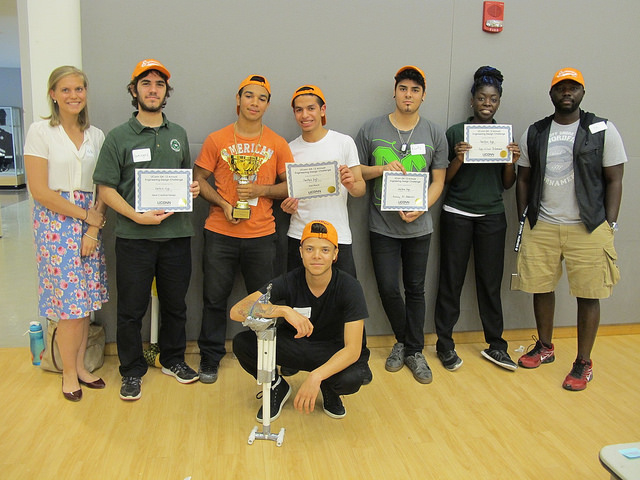 The team from Hartford High School, which took first place in the overall category

Chris Reilly, a mechanical engineering instructor at Vinal Tech, said the competition is a good way to inspire the students to think like an engineer.

“It gets them to use their mind to design something, and ask ‘What’s the objective?’” he said.

The real test came during the competition. The first part was an obstacle race, designed to test for speed. The second part tested for stability, and required competitors to hold an egg on a spoon while they completed the course. This is where the teams learned that what works in theory doesn’t always do so in practice. Zachary Costa-Mello of Ellis Tech navigated the obstacle course adeptly, until the duct tape that adjoined his knee to the prosthetic gave way.

“I did not foresee that happening with the tape,” he said, post-race.

Members of the team from Hartford Public High School said they overthought things when they developed their prototype, and now were taking a simpler approach.

“We’re just going for stability,” said student Franky Vargas, as his teammates applied a generous amount of duct tape to the prosthetic. “As long as you can walk safely with it, that’s what matters.” In the end, their “stability-is-everything” strategy paid off. The team earned the team the top overall prize.

The GK-12 program has run a series of competitions. In March, students designed and built elaborate Rube Goldberg-style machines to perform the simple task of erasing a blackboard. Last year’s challenge was for each team to design and build a boat that would excel in each of three trials.