On May 21, the School of Engineering welcomed students from Connecticut’s technical high school system to an Engineering Design Challenge, part of an innovative program called Graduate STEM Fellows in K-12 Education – or GK-12 for short. Sponsored by the National Science Foundation, the program utilizes engineering graduate students as mentors for students studying science, technology, engineering, and math.

The program has run a series of competitions. In March, students designed and built elaborate Rube Goldberg-style machines able to open and close a zipper. Last year, teams competed to design a car that could withstand a crash well enough to protect its passenger – an egg. The object for this year’s competition was for each team to design and build a boat that would excel in each of three trials. It proved just as exciting as previous events. 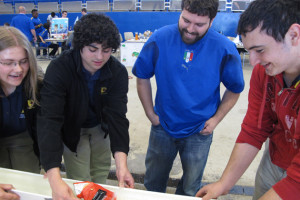 “I’ve never seen them so animated,” said Stephany Santos, a Ph.D. student in biomedical engineering, who served as mentor to the Cheney Technical High School in Manchester, one of the eight competing teams. “They saw the materials and immediately started strategizing.”

Members of the Cheney Tech team placed their sailboat onto the electric motor test track (a water-filled gutter) but it didn’t quite live up their hopes. They quickly ran back to their station and made some tweaks, such as adjusting the direction of a few drinking straws, which they hoped would do the trick.

The event, which was held at the Ratcliffe-Hicks Arena, began with a poster design competition. The posters described one of the teams’ previous projects, a sailboat car designed to travel by wind power and wheels.

Professor Doug Cooper and associate professor Yu Lei in the Department of Chemical & Biomolecular Engineering and assistant professor Sarira Motaref in the Department of Civil and Environmental Engineering, served as judges. They asked questions about each team’s design and building process. It didn’t matter so much how well the boats worked (there were no demonstrations of the sailboat cars at the competition) as whether the thinking behind their concepts was solid, Cooper said.

“It’s their ability to answer and whether they’re convincing in their story line that matters,” said Cooper, who serves as the principal investigator for the program. The team from Ellis Technical High School in Danielson took top honors for their poster. 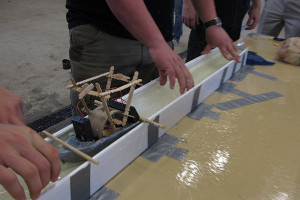 The boat from Cheney Technical High School takes to the water in the event’s motor competition. (William Weir/UConn Photo)

When it came time to put their newly-constructed boats in water, it quickly became apparent that designing a sea-worthy vessel is no easy task. Most had trouble staying upright, let alone moving far in any direction. However, the teams recognized that every setback was a learning opportunity and they demonstrated their ability to think on the fly, thanks to the encouragement of their graduate student mentors.

Trial and error proved the main path to success. Team members scrambled from the water courses back to their stations to make various adjustments to the design. It was a matter of simple improvisation for some; when Ellis Tech’s motor turn out to be running in reverse, they simply turned the boat around.

After several tweaks to their original design, the Wolcott team placed their boat in the motor course. It remained upright – a breakthrough in itself. The motor rotated furiously, splashing water onto the floor.

“You guys sure make a mess,” said Joe Parisi, a Ph.D. candidate in the chemical engineering program, and the Wolcott team’s Fellow.

“Well, it’s going forward,” came the response from one of the crew members. And it did – nearly halfway down the course, longer than any other team’s boat. The team took first in the wind and motor competition and won the trophy for overall best.

Ray Tanguay, head of Wolcott Tech’s computer-aided drafting and design program, was obviously proud of his students. “These are my hardest working kids – that’s why they’re here,” he said. “They learn a ton of things working with this program.”

Among the most valuable lessons is the need to do thorough research before jumping into a project, he said. “And it’s good for them to hear it coming from Joe’s mouth instead of from me, who they see every day.”