Glastonbury Eighth Graders Pour It On During Concrete Day At UConn 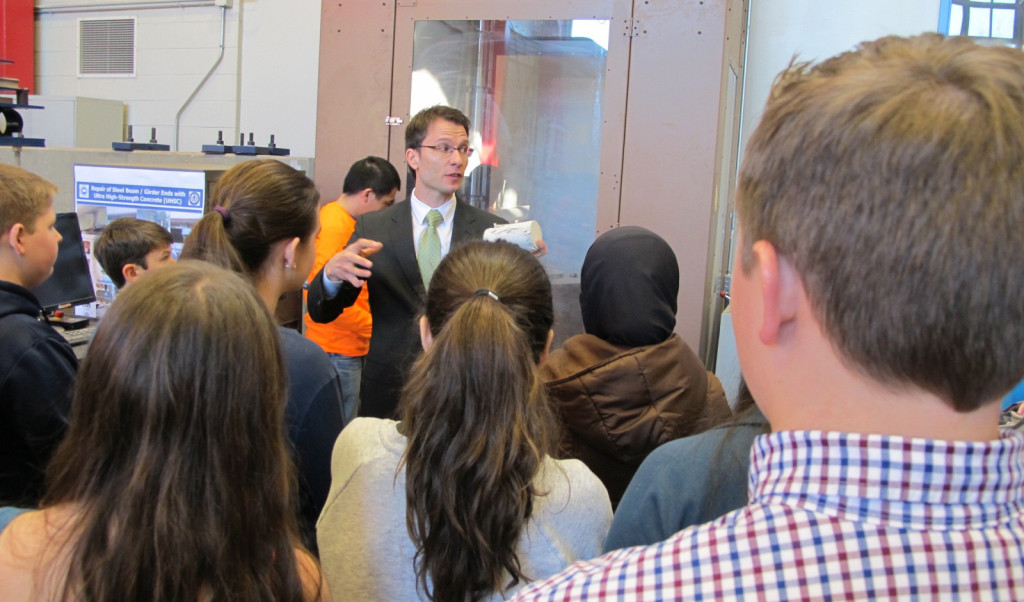 Professor Wille shows a concrete cylinder after it’s been broken.

A group of students gather around a machine designed to smash building materials, stored within a safety enclosure. More and more force presses down on a high-strength, three inch diameter concrete cylinder, well over two hundred thousand pounds. The students watch intently. Finally, the cylinder cracks with an intense bang and splinters of concrete bounce against the safety wall. The students jump and let out a startled scream.

The students are eighth-graders from Smith Middle School in Glastonbury who spent a day exploring concrete engineering at UConn’s Storrs campus on February 2, 2016. Professor Kay Wille in Civil and Environmental Engineering and his graduate and undergraduate students hosted the field trip with a number of activities designed to engage the student’s imaginations while teaching them about ultra-high performance concrete.

Beth Petritus, an eighth-grade science teacher at Smith Middle School, organized the day with Wille. Petritus said that the day came off brilliantly.

“After a field trip, unless you went to an amusement park, something exploded or they were riding on a coach bus, the kids say they didn’t have fun,” Petritus said. “With this trip they really enjoyed it. They were saying how cool it was, and that they would do it again.”

In addition to destroying cylinders, the students poured over 500 Lego blocks made of colored concrete, built spaghetti and marshmallow bridges, watched a documentary on the Burj Khalifa, and spent a lunch break with UConn faculty. Petritus said that the activities fit in well with new state guidelines. 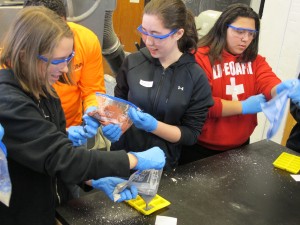 “It fits in with the new Next Gen requirements that we just adopted here in Connecticut, As far as incorporating engineering into curriculum,” she said.

There was a guessing game for the amount of force needed to destroy the cylinders and a competition to see which student designed bridge could support the most weight.  All the students will receive the Lego blocks they made, and the competition winners received white ultra-high performance concrete that had been poured into Star Wars molds.

“The biggest pleasure for me was, during the opening ceremony, I announced they could have a Death Star,” Wille said. “The reaction to that is just 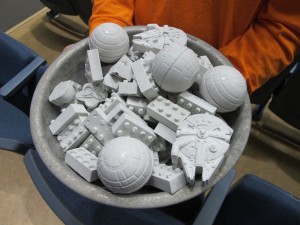 ‘whoa.’ It’s unforgettable. Those are the moments that show why you’re doing this.”

During the lunch break, the students sat down with Kevin McLaughlin, the director of the Engineering Diversity Program, and UConn’s Engineering Ambassadors, to discuss their future.

“It was great that it got the kids thinking about UConn, engineering and just school in general. Now is a great age to get them. They think about it a lot in high school, because they have to. We do events to get them thinking about it, but this kind of made it real.” 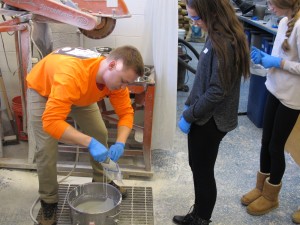 Petritus said that she saw Wille speak when she toured UConn three years ago with her daughter.

“One of the stops was the testing lab with Dr. Wille. We saw him talk about concrete for 10 minutes. We both wanted to change our lives and do concrete, he was such a good speaker. After that we started talking about doing an event,” Petritus said.

“We talked over the phone, and then I invited her to visit our lab, to show her around and show her what we could do,” Wille said. “My assumption was she comes with a class of about 18 students. When we asked how many students, […] she said 110. My first reaction was ‘Wow, that’s more than I expected.’ Then it becomes ‘how can we find a good solution for this?’”

Wille said that part of the solution was to break up the eighth-graders into groups and allow his graduate students, as well as one undergraduate, to run the five events as the eighth graders rotated through the stations.

“My students did an outstanding job not only during the events but also during preparation.” he said. “They were so inviting to the middle school students and worked with them so passionately. It was a real pleasure to see how this worked out.”

Both Petritus and Wille said they hoped to have similar field trips in the future.

“I would love to do it next year,” Petritus said.