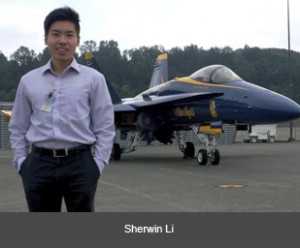 M.S. student Sherwin Li (Electrical Engineering; Adv.: Dr. Peng Zhang) recently returned to campus from an exciting four-month internship at Boeing’s Everett, WA facility.  Sherwin reported, “Boeing is a great company with many opportunities. As a Boeing intern, I developed the auto-landing control law simulation models for stability analysis on the 737 MAX, a new airplane project scheduled to be delivered in 2017. With many new structural and control enhancements on the 737 MAX, Boeing engineers have to configure the control laws to adapt these new features and demonstrate their stability and reliability through robust simulation to ensure the safety of this new airplane.”

He also emphasized the importance of the autopilot: “Nowadays, airplanes can land safely and smoothly even under poor visibility, thanks to the autopilot computer, which makes use of the Instrumental Landing System (ILS) radio signals to accurately guide itself to touchdown on the airport runway.”  He concluded, “Landing is a quick process. With uncontrolled environmental factors such as gust wind and ground effect, its control laws can be very sensitive and require well-tuned control parameters to quickly compensate overshoots and other transient behaviors.”

Sherwin, whose thesis research centers on reliability assessment of photovoltaic (PV) power systems and controls, has already received a job offer as a guidance, navigation and control engineer with Boeing post-graduation.  This academic year, he is serving as vice president of the Student Association of Graduate Engineers (SAGE), which plans several professional development workshops, a barbecue, and networking events for the year ahead.