Two graduate students in the Department of Chemical, Materials & Biomolecular Engineering (CMBE), were honored recently at the national level.

Neil Spinner, a doctoral student advised by Chemical Engineering professor William Mustain, was awarded first place in the Electrochemical Science and Technology poster session at the 219th meeting of the Electrochemical Society, held in Montreal May 1-6.  The winning poster detailed research involving the effect of nickel oxide synthesis conditions on its electrochemical behavior in alkaline media.  Neil’s research focuses on the design, development and characterization of novel anode catalysts for the room temperature carbonate fuel cell in which atmospheric CO2 is converted to commodity chemicals while concurrently producing electricity.

Yang Zhong, a doctoral candidate advised by Dr. Leon Shaw, was one of just 14 students selected to receive a fellowship enabling him to participate in the 2011 Center for Space Nuclear Research (CSNR) Summer Fellowship Program.  The CSNR program is an intensive 10-week program for graduate and undergraduate students in a variety of scientific and engineering disciplines.  It was created at the Idaho National Laboratory as a means to investigate potential nuclear technologies that could dramatically alter space exploration.  Over 50 students applied for the summer 2011 fellowships.  Yang’s project involves tungsten cermet fabrication, the development of a “universal encapsulation” for all radioactive sources that are to be launched from Earth, including radioisotope sources, nuclear rockets and nuclear reactors for surface power.

In addition, Jenabay Hupman, who received bachelor’s degrees in Environmental Engineering and German in May, was awarded the Outstanding Senior Scholar in German. The award was presented by the Department of Modern and Classical Languages’ German section at UConn. 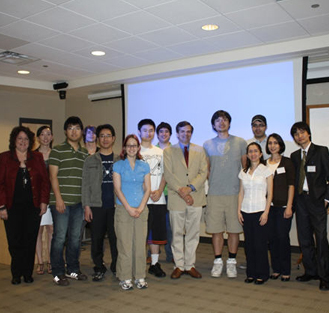 On June 1, the UConn chapters of SPIE and OSA jointly hosted a one-day student conference on optics and photonics.  The conference, co-sponsored by the Electrical & Computer Engineering (ECE) Department, featured a keynote address by Dr. Michael Bove of the MIT Media Lab, entitled “Moving Holographic TV from the Lab to Your Living Room.”  Graduate students from ECE, the Biomedical Engineering, Cell Biology and Material Science from both UConn and Yale also presented their research.