Grant Will Fund Study On The Genetics Of Addiction

When it comes to diagnosing substance-related disorders, health care professionals are mostly limited to checking for behavioral and other clinical symptoms – crude tools for a complex condition. But a new study aims to find the genetic causes of those specific symptoms, which could lead to a more nuanced way of looking at addiction.

The study is led by Dr. Jinbo Bi, an associate professor in the Computer Science & Engineering Department, and was recently funded with a $1.12 million grant from the National Institute of Health (NIH). Bi and her fellow researchers will develop new statistical tools and techniques designed to better classify the many variations of substance dependence. Ideally, this would lead to more effective treatment by improving our understanding of the role that genes play in these disorders. 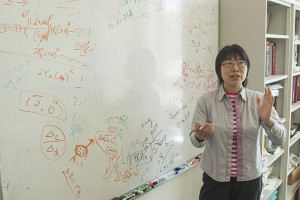 Jinbo Bi talking about her research on May 29, 2015. (Sean Flynn/UConn Photo)

Researchers have made great progress in using patients’ genetic information to diagnose and treat other diseases. Genome sequencing, for instance, has led the way toward customized – and better – treatment of certain cancers. But substance addiction, with its multiple causes, has been a tougher nut to crack for genetics researchers. For now, doctors have mainly relied on the symptoms listed in the Diagnostic and Statistical Manual of Mental Disorders. The current edition provides several criteria, based mostly on behavior. Examples include whether a patient worries about stopping, or spends a lot of time trying to obtain drugs or alcohol.

Previous studies have looked at the genes associated with the diagnoses of substance use disorders, but Bi’s study takes a more specific approach by looking at the genes associated with the clinical symptoms that lead to these diagnoses. For instance, two people diagnosed with alcohol dependence can have different symptoms. Perhaps only one has trouble sleeping, or one cites a diminished social life while the other goes to so many parties that it’s affecting work. Bi, who has been with the School of Engineering since 2010, said the study will look at whether genetic variances can account for these differences. To integrate multiple clinical symptoms with multiple genetic variants, however, requires more sophisticated algorithms than what researchers have now. Developing new ones is the first task in the four-year study.

The study will make use of a database of more than 11,000 subjects, who were identically assessed in genetic studies of cocaine, opioid and alcohol dependence. This is the largest sample of its kind, Bi said.

With such a robust sample, the researchers expect to put a much finer point on diagnosing different addictions. For instance, the criteria provided in the DSM doesn’t discern between different types of cocaine dependence. Preliminary studies by Bi’s team, though, show that a variant in what’s known as the CLOCK gene could be the difference between addicts who inject the drug and those who consume it in other ways. And the more we know about which genes are associated with specific subtypes of drug dependence, the closer it brings researchers to developing more effective treatments. The fact that the CLOCK gene regulates our circadian rhythms, for instance, could be significant.