Hacking For Health At The 2015 Patient Experience Hackathon

How do you improve the patient experience? For starters, get more than 240 participants to hack out a solution.

That was the goal of the 2015 Patient Experience Hackathon: Improving Recovery and Reducing Readmissions, organized by the University of Connecticut, the Yale Center for Biomedical and Interventional Technology (CBIT), and the Center for Outcomes Research and Evaluation (CORE). The event challenged participants to come up with a way to make hospitals a better experience for patients and reduce the number of readmissions. 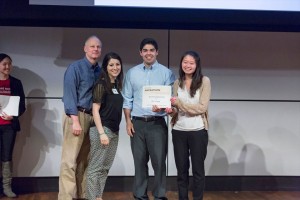 UConn’s Entrepreneurship and Innovation Consortium served as one of the sponsors of the event, which was held at Yale. The Consortium’s co-director, Hadi Bozorgmanesh, professor-in-residence in the School of Engineering, said the Hackathon was the first of its kind in the state and that he expects UConn will host similar events in the near future.

Participants came from around the country and included students, doctors and other professionals. Of these, 45 were from UConn.

“We’re working on an app that’s supposed to help children with their food allergies,” said Michelle Custeau a manager at an insurance company in Boston, adding that the device keeps track of their food intake. “It’s a fun game, so they stick with it, and it allows parents to keep track of what their kids are eating.”

Next to her was teammate Lior Trestman. The competition was ending in a few hours and Trestman didn’t have time to look away from his computer – it was his job to work out the technological details of the project. “He’s been here all night,” Custeau said. She was the part of the team that worked on the business model and figuring out how to sell it to investors.

It was INcentiHALER – a team made up mostly of Yale students – who took the top $500 prize. They came up with a new inhaler, one designed to measures breaths, and be easier to use. After working more on their projects, teams will return April 23 to compete for a $3,000 grand prize.

UConn didn’t walk away empty-handed, though. The team Pill Clique, which includes UConn student Elizabeth Pouya ’17, won $200 for best presentation. Their creation is an app that essentially helps women take their birth control bills by turning it into a competition between the user and other female friends using the app.

“The app keeps track of who was least successful in adhering to taking their birth control and ranks the group members at the end of each week,” Pouya said. “Our goal with Pill Clique was to help remind females to take their birth control in a fun way that incorporated lifestyle factors. Essentially, Pill Clique gives female friends an incentive to take their BC by turning it into a game.”