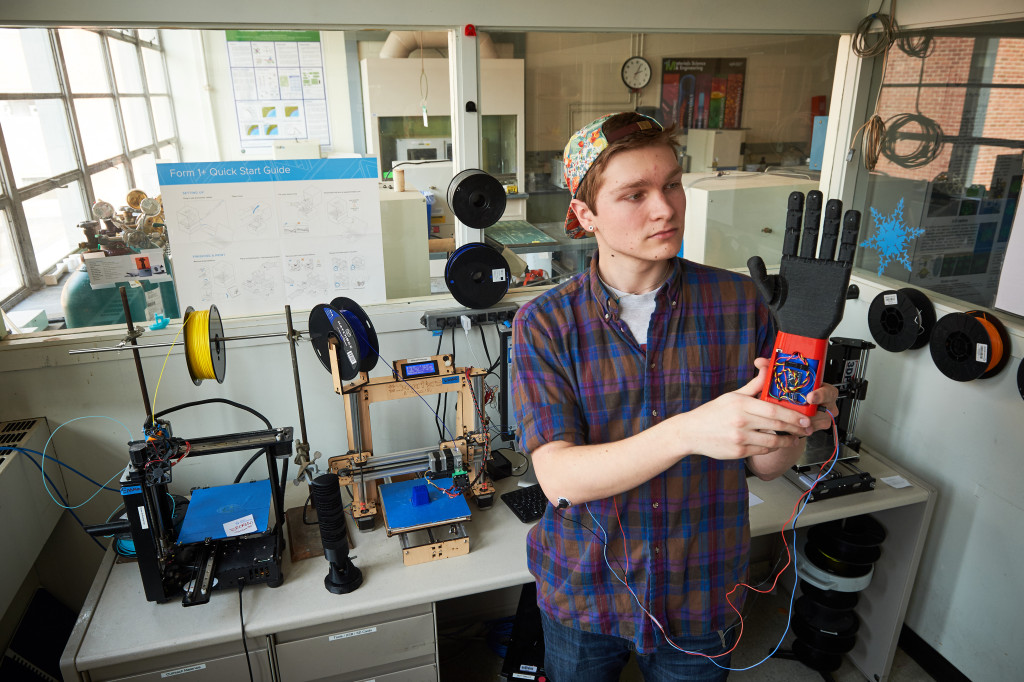 When Stephen Hawes ’17 (ENG) was a kid, he liked to play with Legos. But he loved to fold origami, creating whatever he could invent out of reams of Post-it-sized square paper.

“Legos had all the instructions, so they didn’t really do it for me,” he says. Instead, Hawes wanted to create something on his own.

Hawes – a mechanical engineering major who realized during a high school engineering class that he could get paid to invent things – was awarded a UConn IDEA grant in fall 2014 to build a prototype of a customizable, 3-D-printed prosthetic arm and hand that utilizes open source EMG sensors to move the prosthesis.

The IDEA grants program is designed to provide undergraduates in any major a stipend of up to $4,000 to develop innovative, creative, and personally meaningful projects. While the ideas don’t have to be tied to a major or minor field of study, they do need to be guided by a student’s academic goals and plans for the future.

Hawes, who is pursuing a minor in computer science, says realizing that engineers could both design the physical aspects of an object, and program the electronics that make the invention work was a huge revelation for him.

Customizable, But Not High-Cost

He says the idea for the “ATLAS Arm” came to him after he saw a display at Maker Faire in New York City in 2014. He was attending what he calls “Comic Con for Engineers” to show off a wrist-mounted flamethrower he had built.

“An organization called e-NABLE had a 3-D-printed prosthetic hand for kids that have a palm but don’t have fingers. When they move their palm forward, it makes the fingers close,” Hawes says. “But there aren’t a tremendous number of kids who have that particular amputation; there are other amputations or disabilities that are more common.” 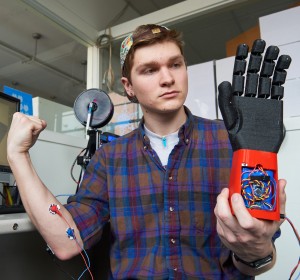 “It would be really cool to take everything I’ve been working on and apply it in a way that is beneficial, not just, ‘oh look, this hand closes when you squeeze your muscle,’” says Stephen Hawes ’17 (ENG). “To have it actually do something practical for a person, that would be so cool.” (Peter Morenus/UConn Photo)

So Hawes wanted to build a similar prosthetic for someone who was missing a whole hand or wrist.

“I saw what they were doing with the physical component and I thought about what I could do with the electronic component,” he says. “I knew I had the ability to do it. I’ve done stuff like that before.”

To allow the amputee to control movement, Hawes’ prosthetic would need to employ an electronic mechanism that could read electromyography (EMG) signals from a person’s muscles.

“There’s this really cool board, and it only costs about $30, that plugs into an Arduino microcontroller and it can get a really good, definitive signal from your muscles,” Hawes says.

Hawes had started working with Arduino kits in an introductory computer science and engineering class taught by Jeffrey Meunier. Arduino boards are small circuit boards that can be programmed to control things – like turning a light on and off – based on input received from sensors.

In addition, his prototype is 3-D-printed with a flexible, rubber-type material rather than the rigid plastic commonly used in hobby 3-D printing. The material allows the hand to grip and grasp.

But aren’t there already prosthetic limbs that can move?

“The big difference with my project is that it’s inexpensive,” says Hawes. “Most EMG-controlled prosthetic hands for a mid-forearm amputation run between $20,000 and $30,000. I built my prototype for $300. It’s orders of magnitude cheaper.”

Custom-made prosthetics can be pricey, in part, because of the technology, materials, and expertise required to create a mold and cast a socket for the prosthetic. But Hawes’ prototype uses 3-D scanning, like the kind found in a $40 Xbox Kinect motion sensor, to create a model for the socket. The Kinect software is free, and even the highest-end consumer 3-D printer costs a fraction of what a typical prosthetic might.

“Especially for kids who are running around on the playground breaking parts, they can go home and say, ‘Mom, I broke this part,’” Hawes says. “Mom can say, ‘OK,’ run the 3-D printer, and then they have a new colored hand the next day.”

From Prototype to Person

Hawes is grateful for the financial support provided through the IDEA program, which he says enabled him to make progress on a project he’s passionate about in a fraction of the time it would’ve taken otherwise.

“If I didn’t get the grant, I would’ve done it anyway. But UConn gave me the money to pursue this endeavor,” he says. “It’s just such a cool program. Because I had the money, I was able to do it a lot quicker.”

Moreover, he says he’s thankful to have been able to tap into resources like engineering professor Anson Ma, the principal investigator on Hawes’ project, as well as the support of the IDEA program staff, who helped guide him through the Institutional Review Board (IRB) process and provided invaluable advice.

Hawes has received IRB approval and soon will be working with an amputee to take his project out of the prototype phase and create a usable, customized prosthesis for a real person.

“It would be really cool to take everything I’ve been working on and apply it in a way that is beneficial, not just, ‘oh look, this hand closes when you squeeze your muscle,’” he says. “To have it actually do something practical for a person, that would be so cool.”

Eventually, Hawes plans to release all the files associated with the project online so that others can improve upon what he’s started.

“The whole point of the open source community is to have everyone collaborate and work faster than just one closed, proprietary group,” he says. “And 3-D printing lets you rapid-prototype, build things quickly, test stuff out.

“Being able to release that to other people that have more experience in prosthetic hand design, or whatever the case may be, allows it to progress a lot faster,” he adds. “I’m looking forward to seeing how what I have done helps impact that community and move things forward.”

To learn more about Stephen Hawes’ inventions and see videos chronicling his progress on the ATLAS Arm, visit stephenhawes.com.