By John Sponauer
Reprinted with permission from the UConn Foundation’s Our Moment newsletter (Sept.-Oct. 2012) 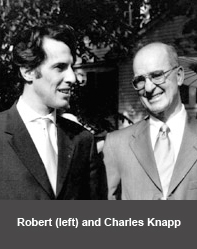 UConn Emeritus Professor Charles H. Knapp ‘53 ‘62 grew up in next-door Coventry, Conn., attended a one-room schoolhouse as a child, and, later in life, before he owned his own car, would hitchhike his way to Storrs for classes.

He earned two degrees from UConn, a Masters from Yale, and became the first University Scholar from the School of Engineering. After time in the US Air Force and working for corporations like RCA and IBM, he returned to Storrs for the start of a 40-year career. Raising his family with wife, Charleen, in Mansfield, Knapp became an icon at the school in the rapidly changing world of electrical and computer engineering.

This memorable life is now being honored through the creation of the Charles H. Knapp Associate Professorship in Electrical Engineering, thanks to a $363,000 donation from Knapp’s children, Robert, Linda (DelGizzi), Barry and Jennifer (Loomer).

Robert Knapp earned his engineering degree from Princeton and went on to found the Boston-based investment management firm Ironsides Partners. Although he’s not working as an engineer today, he says his father’s guidance, support and tutelage have helped the whole family succeed in life.

“He was our best tutor. I certainly wouldn’t have passed engineering if he hadn’t helped me out,” Robert recalls. “Today, in the world of finance, I draw on my engineering background quite a bit, and specifically signals and systems from electrical engineering. My mother was a schoolteacher as well, so we all grew up steeped in education. We feel that there are few better causes than improving education, and specifically engineering education in this country. If America wants to compete, its engineering schools, faculty and students are a priceless resource to support.”

Charles Knapp says that the decision to create an associate professorship, typically awarded to newer, upcoming faculty, makes his family’s gift particularly meaningful. “The younger professors have the freshest education and ideas, and are looking for places where they can grow,” he says. An associate professor may teach several classes a semester and also find time to do research as well, which can become all-consuming. “This professorship will give its holder an edge and will be very helpful in retaining the best associate professors. It is important for the university and the college if we can keep them here, and it’s good for local industry as well.”

Interim Dean Kazem Kazerounian of the School of Engineering echoes the value of maintaining a strong faculty through private support like the Knapp family gift.

“The School of Engineering can only thrive if we are able to recruit, promote and retain innovative thinkers. It is difficult to think how the legacy of Charles Knapp, and all of the talented engineers he shaped, could be more appropriately honored than with a gift like this,” he says. “His family’s generosity and vision are extremely meaningful to all of us in the School of Engineering.”

The Knapp family will join the School of Engineering at a dinner this fall, when the recipient of the first Knapp Associate Professorship will be named.

Beyond the technical help his father gave him, Robert Knapp says that his father’s mentoring of graduate students, often from overseas, opened his eyes to other cultures and opportunities and made his family see the influence of Charles Knapp around the world.

“It was always interesting to me how many of his students came from other countries like Taiwan or India,” he says. “I look at my investing career today, where I spend a lot of my time in emerging markets similar to those very same countries, and I can’t help but think that he influenced that. On a larger level, I don’t think there’s a better way to promote the good values that America can offer than having students from other countries come and spend time in places like Mansfield, Connecticut, working with people like my father.”