Honors for Drs. Epstein and Welti 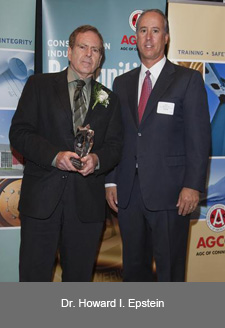 Dr. Epstein, a professor in the Civil & Environmental Engineering Department, was presented the 2011 Educator of the Year Award.  He joined UConn in 1976 and teaches courses in Applied Mechanics, and in Structural Analysis and Design at the undergraduate and graduate levels.  Dr. Epstein has written approximately 100 technical publications on structural engineering, and has been involved with the analysis, design, and research of many specialized structures such as pre-engineered metal buildings, storage tanks, floating roofs, transmission poles, and Ferris wheels.  While serving as a member of the task force investigating the collapse of the Hartford Civic Center roof in 1978, he advanced his expertise in block shear, and he has contributed to changes in AISC’s specifications on block shear.

“Education,” Dr. Epstein says, “is the foundation of all great engineering endeavors.” He has been associated with Torello Engineers, Essex for over 25 years and in conjunction with them has delivered hundreds of seminars to the profession.  Several of his innovative structural designs with Torello have won engineering excellence awards from Connecticut Engineers in Private Practice. Dr. Epstein is a Fellow in the American Society of Civil Engineers (ASCE) and was the presented the Connecticut Society of Civil Engineers Benjamin Wright Award, the highest honor that ASCE can bestow upon a member of the civil engineering community.  He is a member of the Connecticut Academy of Science and Engineering.  Dr. Epstein earned his bachelor’s degree from The Cooper Union and his M.S. and Ph.D. degrees from Northwestern University. 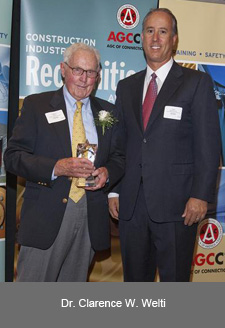 Dr. Welti, a licensed geotechnical engineer, was presented the 2011 Designer of the Year Award.  He owns a consulting practice, Dr. Clarence Welti, P.E.P.C., and has practiced geotechnical engineering since earning his B.S. at UConn in 1949 (he received his Ph.D. at UConn in ’71).  During the 1950’s, he was geotechnical engineer of record on three sections of the Connecticut Turnpike – now I-95 and I-395. Across his career, he has been the geotechnical engineer on several sections of interstate roadway and bridges, school buildings and other institutional structures, a number of projects at the Groton Submarine Base, a monorail constructed in 1975 to Bradley field (now Bradley International Airport), oil terminals along the Connecticut River, transmission line foundations, particularly along the Bridgeport-Norwalk Railroad Line, and nearly all of the building and civil construction at the Mohegan Sun and Foxwoods casinos.

His recent work has included the geotechnical analysis and design of the foundation that supports a high-rise structure at Saint Francis Hospital. This project was complex, notes Dr. Welti, because it required that a portion of the mat foundation overlay soft clay while another portion overlay piers drilled into rock; another portion entailed a four-story parking structure on soft clay. Summing up the nature of his work, Dr. Welti reflects that “Geotechnical work involves some science, but it’s also art – being around long enough to have experienced a range of different soil types, clays, rock, seismic effects and the like.  Cities like Hartford, Boston, Paris and London were built upon deep clay deposits that have an enormous impact on how the foundation is constructed to withstand loads.”

Dr. Welti is a member of the Tau Beta Pi and Chi Epsilon honor societies, a Fellow of ASCE and the recipient of the Benjamin Wright Award for Civil Engineering.