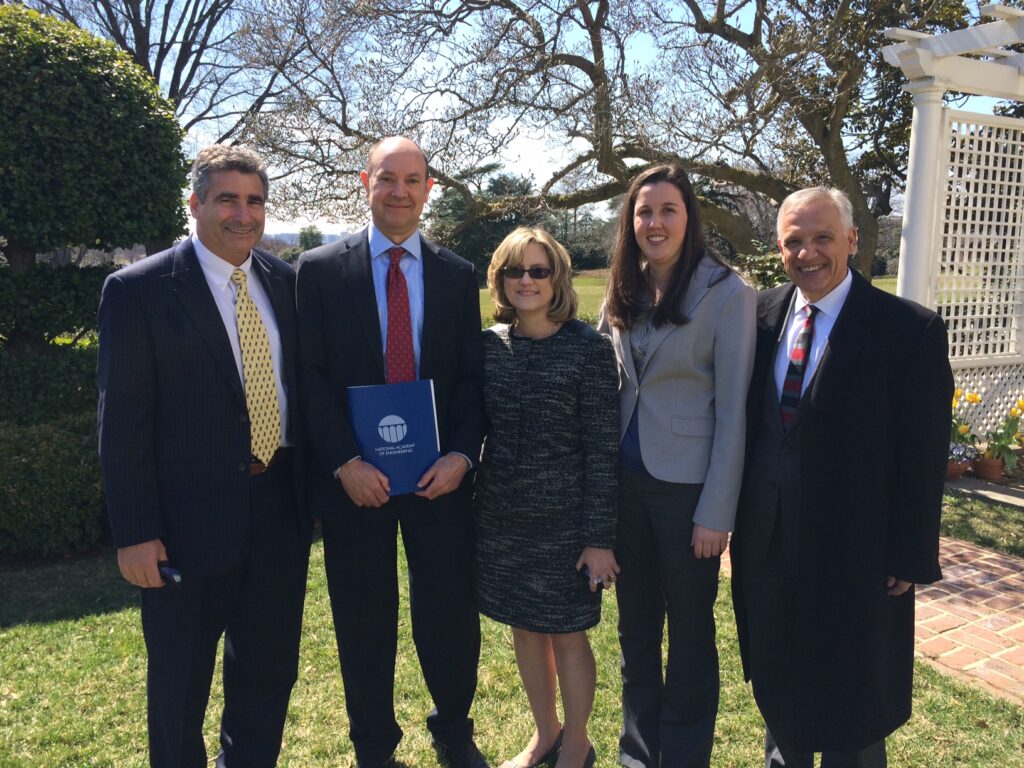 Katsouleas (far left) and his colleagues present at the White House in 2015 (Photo from Duke University School of Engineering).

By: Eli Freund, Director of Communications and Marketing, UConn School of Engineering

When Tom Katsouleas joined Duke University as dean of the Pratt School of Engineering in 2008, he saw an opportunity to not only change the world of engineering and its direction but put it into the hands of the next generation.

Katsouleas, currently a University of Connecticut faculty member in Electrical and Computer Engineering and Physics, picked up the phone during his first week as dean in 2008 and brought together engineering deans Yannis Yortsos at University of Southern California and Richard Miller at Olin College, and asked them a simple question: “Is our older educational pedagogy preparing our students to tackle the grand challenges of this next century?”

The grand challenges that Katsouleas was referring to were the list of “Grand Challenges” from the National Academy of Engineering in 2008 that outlined 14 areas of focus that engineers needed to tackle and advance. Some of the challenges included making solar energy economical, enhancing virtual reality, restoring and improving urban infrastructure, and to secure cyberspace.

“We announced the program at that first summit, and immediately we had 12 schools interested off the bat,” Katsouleas said. “Over time, more and more people started showing interest, including the White House.”

In that call from the White House, they challenged Katsouleas and his collaborators to put together 50 interested schools, which they ultimately did and more, presenting on it to the Obama Administration—putting a major spotlight on the program. In March 2015, President Obama was sent a letter of commitment signed by 122 member schools pledging to educate and enroll 20,000 students in the program by 2025.

When Katsouleas became president at UConn in 2019, he shaped some of his vision for the future of the University from many of those core competencies.

“I saw the effect those competencies had when we applied them to the learning experience of the engineering students at Duke. Multiple studies have been done that show that life transformative experiences, service learning, and an entrepreneurial vision lead to successful students. When I came to UConn, I took a lot of those experiences and learnings with me and applied it more broadly to the entire campus,” Katsouleas said.

In January of this year, the NAE recognized Katsouleas and his collaborators for the impact that the Grand Challenge Scholars Program has made on society through the Bernard M. Gordon Prize, which recognizes trailblazers in engineering education.

When reflecting on the past decade of growth, Katsouleas can’t help but glow thinking about all the students that have benefited.

“When I was an undergraduate, I was interested in physics, but the courses didn’t satisfy me when it came to my desire to make a difference in the world. At the time I didn’t know I was missing something,” Katsouleas said. “So many of the students that have gone through this program got to have that experience and are making a sizable difference in this world.”