For the third year in a row, UConn had the largest regional championship of its kind in the US. More than 600 students on 81 teams from five states came to match wits against each other for a trophy and the chance to compete in the national championship in Washington D.C.

The event was hosted by UConn Engineering, with more than 165 undergraduate engineering student volunteers helping to make this a very successful event. Kevin McLaughlin, the School of Engineering Diversity and outreach Center Director oversaw the competition. 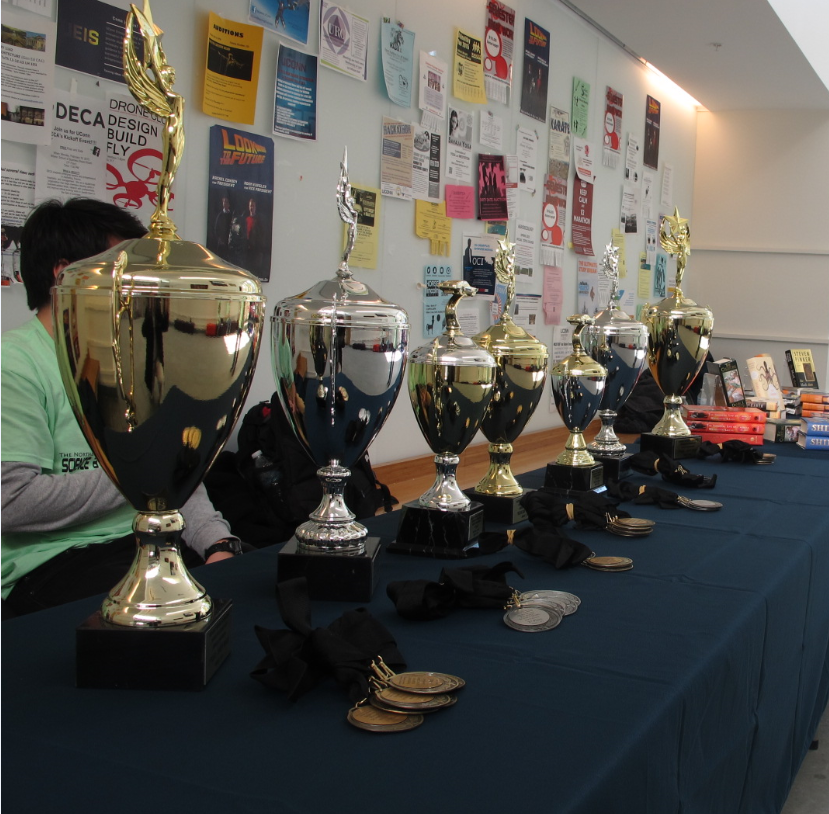 Trophies for the Science Bowl winners

The teams, from Connecticut, Massachusetts, Rhode Island, New York and New Hampshire faced off in a Jeopardy!-style quiz bowl covering a very wide range of scientific minutia. A few minutes into the first round, it was clear that this was no competition for mere dabblers.

“What type of leukocytes, characterized by their CD4 receptors secrete cytokines that activate nearby B and T cells?” was an early question in the first round between teams from Avon, CT and Cheshire, CT. The answer: Helper T Cells.

Avon, which won the first round, had a deceptively simple winning strategy.

“We did a lot of practicing,” said Emily Wert, a junior, who added that this was the first time a lot the team members competed in the Science Bowl. “And sometimes there’s beginner’s luck.”

The all-day competition ended with “The Final Battle of the Civil War”  – a showdown between the winners of the two regions. This year, it was hometown favorites E.O. Smith High School from Storrs, representing the South Region, and Lexington High School from Massachusetts for the North. It was E.O. Smith High who emerged victorious and took home the big trophy. Both teams, though, earned their way to compete in the National Science Bowl in the nation’s capital.